All 200 spots for drive-in gone, sponsorship now the big push

Written by Noel Edey Saturday, May 30 2020, 11:00 AM
Article continues below advertisement ↴

Morgan Price and Chantelle MacKay, of Cochrane, were first in line in the cul-de-sac by Cochrane Toyota to get their tickets to the giant drive-in, being held in the parking lot of the Spray Lake Sawmills Family Sports Centre on June 6.

The pair arrived at 12:25 p.m., and we're pleasantly surprised to find themselves first.

"We weren't really trying to be first, but we didn't want to wait in a crazy long lineup," says Price.

The pair came in a smaller car this time, but movie night they'll be enjoying a much roomier 4-Runner.

"I think it's a great idea. I remember they did a movie in the park at the Ranche a few years ago and that was awesome, so we're really excited about this."

To give Cochrane area residents the best chance to secure a spot for the June 6 drive-in event, organizers gave out free tickets starting at 1 p.m. on May 29.

"It was outstanding," says Ryan Baum, president of the Young Professionals Rotary Club. "Two-and-a-half hours, and they're all gone."

When 5,600 people from across the region said they were interested in or would be attending, the club was proactive in dispersing advance tickets. While admission is free, you need a ticket for your vehicle to enter.

"This way, it allowed us to focus on our local residents first," explains Baum. "And if anyone from outside of our community could make it, we opened the doors to them, too."

Some came by vehicles, others by motorcycle, and there were even some on foot. A few also brought nonperishable food donations.

"We had some people bring by some nonperishable, so we've started the food drive portion of it already, and hopefully we can get some more at the event."

Now with the tickets gone, the Rotary Club is turning its attention to securing more sponsorships and partnerships to make this a successful event for the Cochrane Activettes Food Bank.

"We're definitely looking for sponsors. We want to take it over the top for the food bank."

There are several levels of sponsorships and partnerships available. Plus, anyone who comes on board for the first event will automatically be included in the Canada Day drive-in, says Baum.

To learn how you can become part of the event, visit this page.

The GoFundMe page for monetary donations to the food bank can be found here.

Those who didn't get tickets this time around may be more fortunate next time. The Spray Lake Sawmills Family Sports Centre will once again donate the use of their parking lot for a second drive-in on Canada Day, July 1.

More information will be released soon.

During the June 6 showing, the Rotarians will be gauging whether they can accept more vehicles next time around.

"When we first opened up, we were wondering if we'd have enough people to put on an event like this. Now we're wondering how we can make the facility bigger and include more people." 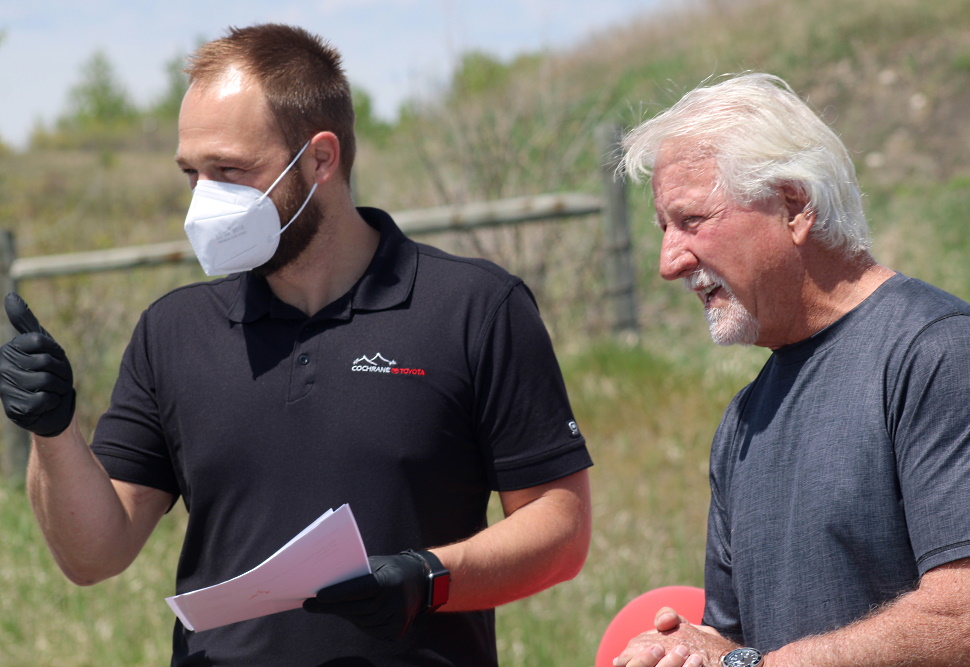 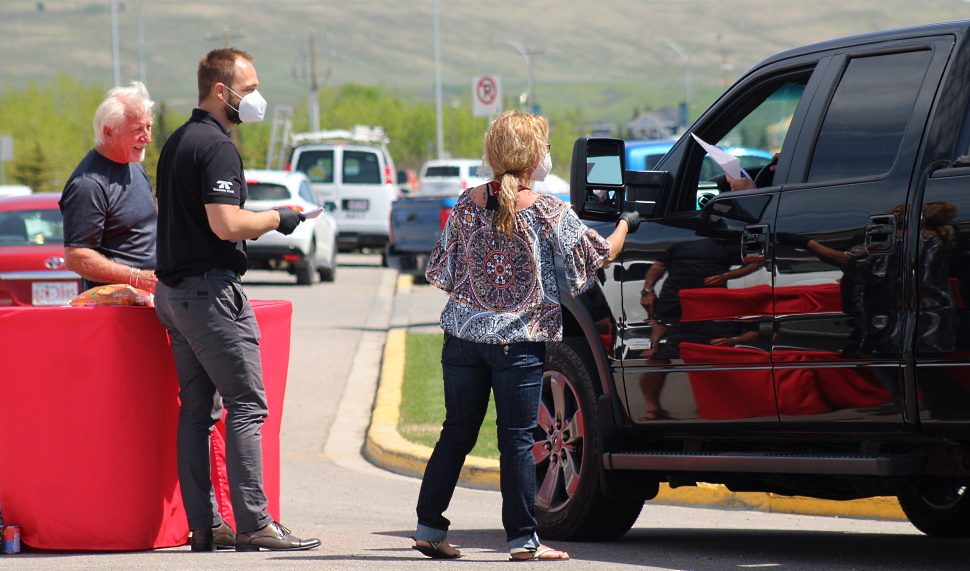 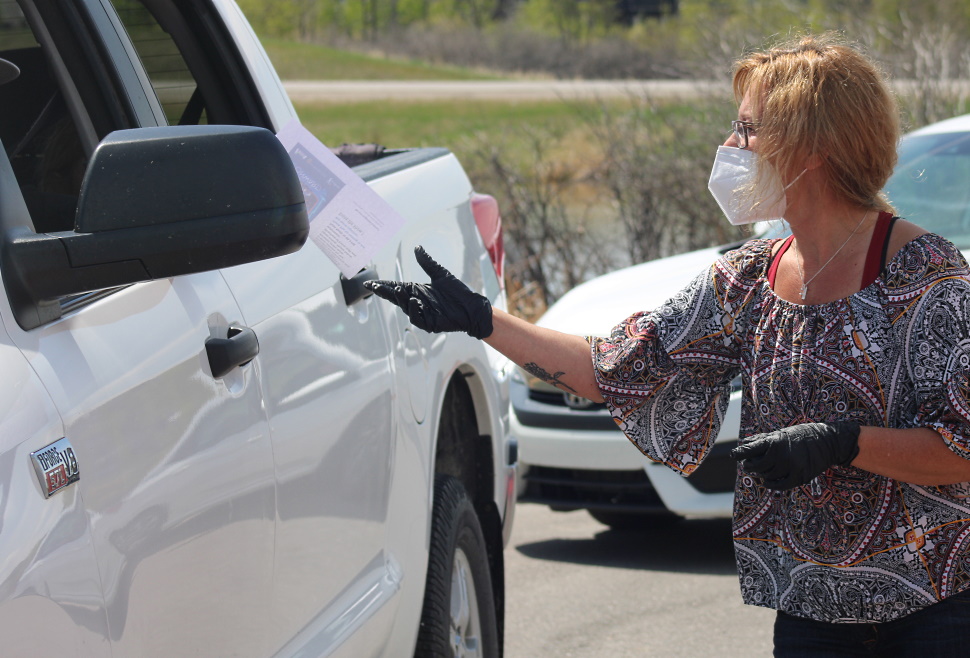 Gerri Hume gave out the tickets. 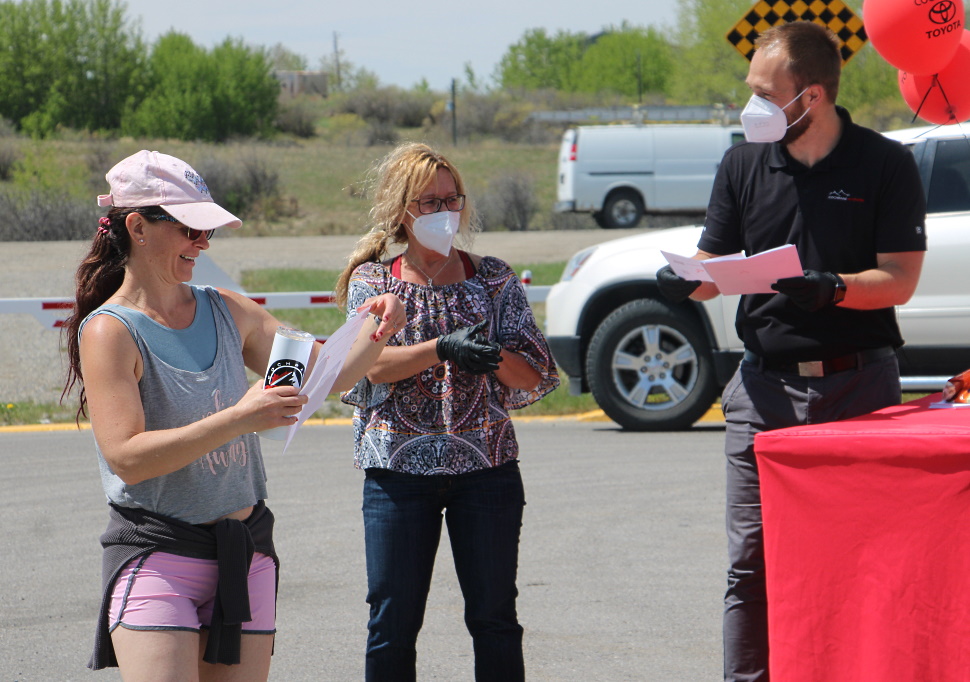 They came by vehicle, by motorcycle, and on foot. 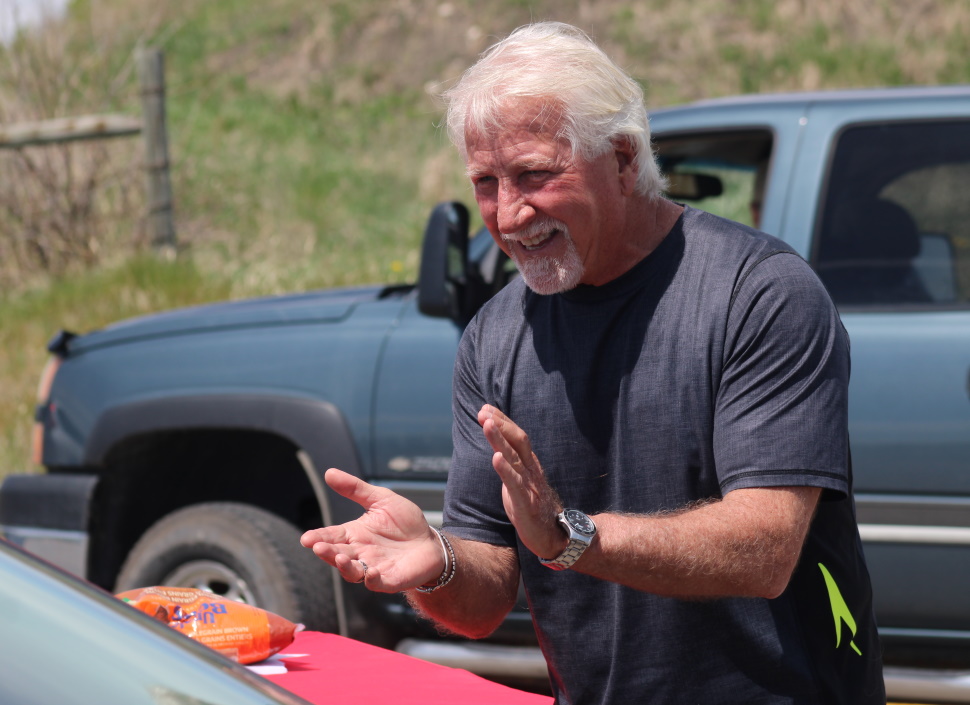 The line was long but moved steadily, and within 2 1/2 hours all the tickets were gone.
Previous Next

COVID-19 Update: Hospitalizations drop to below 300

Glenbow and Getty do not let their lack of sight slow them down!