The Cochrane Generals have blemished the perfect record of the Okotoks Bisons with a 5-4 win at the Cochrane Arena, on Nov. 5.

The Gens got a desperately desired win against their rival after losing the first two meetings and going down three straight against the Bisons in last year's HJHL championship.

The game was fast and physical from the start and offered the quality of hockey you can expect from these two clubs when they leave the gloves on.

The Gens came out in a blaze, firing 20 shots on Bisons ace goalie Dylan Fries. Only one got through, with Riley Hopper scoring at 2:33 from James Quaife.

The Bisons stepped up their game in the second, outshooting the Gens 16-10, and briefly tied the game with AJ Belanger's first of three goals on the night. Eighteen seconds later, Gen Grant Ovans scored the go-ahead goal, assisted by Diago Coehlo and Jamal Kalaf. Another came 46 seconds later from Logan Paquette, assisted by Patrick Forde and Tristan Ripplinger. Bison Braedon Legrandeur scored again to bring the Bisons within one by the end of the period.

Tristan Ripplinger gave the Gens a 4-2 edge on the powerplay goal earlier in the third, assisted by Brendan Thubron. The Bisons got a powerplay goal of their own from Belanger to pull the Bisons within one before Ripplinger struck again, this time with the help of linemates Forde and Paquette.

Belanger capped off his hattrick with 3:42 remaining. Okotoks pushed hard with a six-man attack late in the game, but the Gens limited their scoring opportunities to notch the win.

Finding team chemistry is always a challenge when you have a number of new players, but he believes the team is finding it.

He's impressed with his new linemate Logan Paquette. Together with Ripplinger, the line continues to be among the best in the league. They combined to score three of the Gens' five goals.

"I'm shocked he got passed over for AAA, but we're happy to have him. It's been great so far, so we'll continue to build on it."

"They're never just going to take the perimeter shot," says McGinnis. "They're always going to look for the middle of the ice, or put it behind and move it in front."

He's feeling good about the season.

"I feel like we're in the groove now. We just have to keep building and moving forward and catch up with those guys."

It was the second goal for Ovans, who was added to the line-up a few games into the season. He's glad he got the call.

"We're a close group, and we're going to have a good year, for sure."

"They played and we played well. It was cat and mouse, and that's how hockey's played."

"Everyone showed up focused, and I'm very happy with the result. It gives the guys a lot more confidence going forward,"

While praising many for their performance, he shines the spotlight on Connor Stephenson.

"He was outstanding. He must have played 30 minutes. He got a lot of ice, and that line looks really good. He was the big leader tonight."

Unlike the previous penalty-ridden games between the two teams this season, this one offered quality end-to-end hockey. The Bisons had just two minor penalties and the Gens accumulated 22 minutes, 12 of them from a check from behind penalty that came with a game misconduct for Dagan Kadlec.

A four-man referee system was incorporated after the last two games produced 223 minutes in penalties.

The Gens have a pair of road games this weekend against the Mountainview Colts and Medicine Hat Cubs. Both of those clubs have wins against the Gens.

Cochrane is second in the south division and the entire HJHL with an 11-5 record. The Bisons have a 14-1 record and top the league. 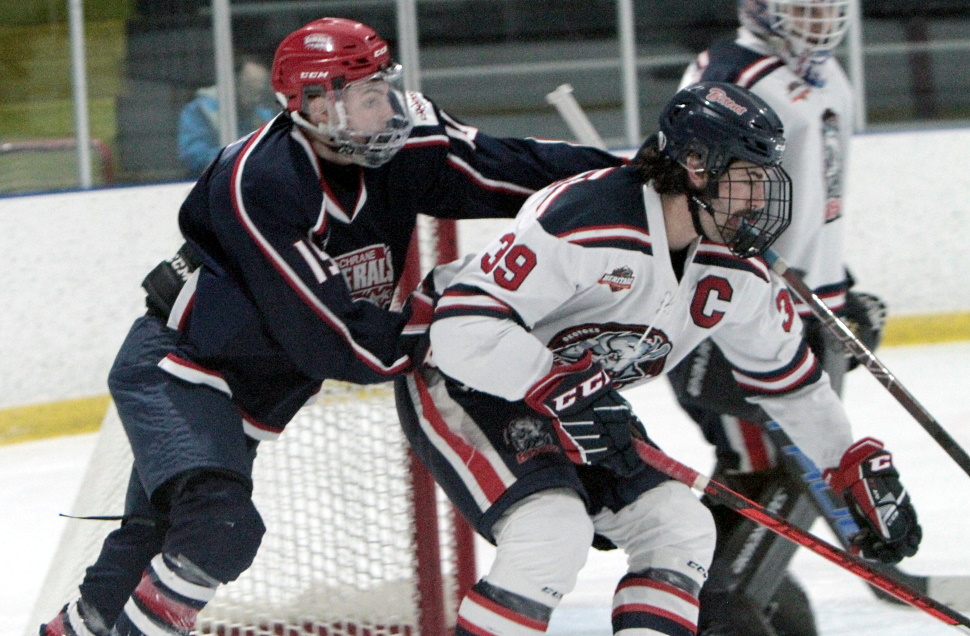 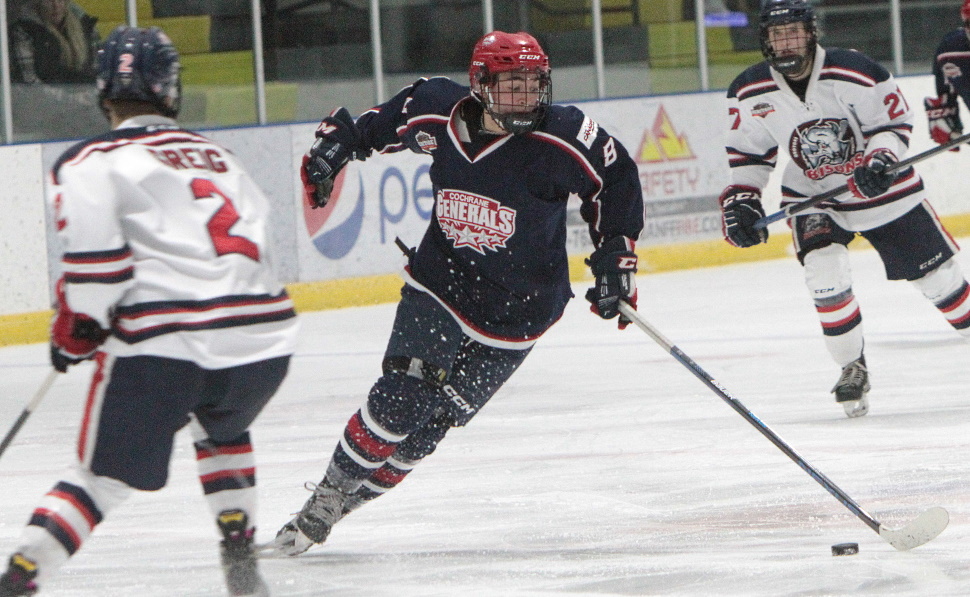 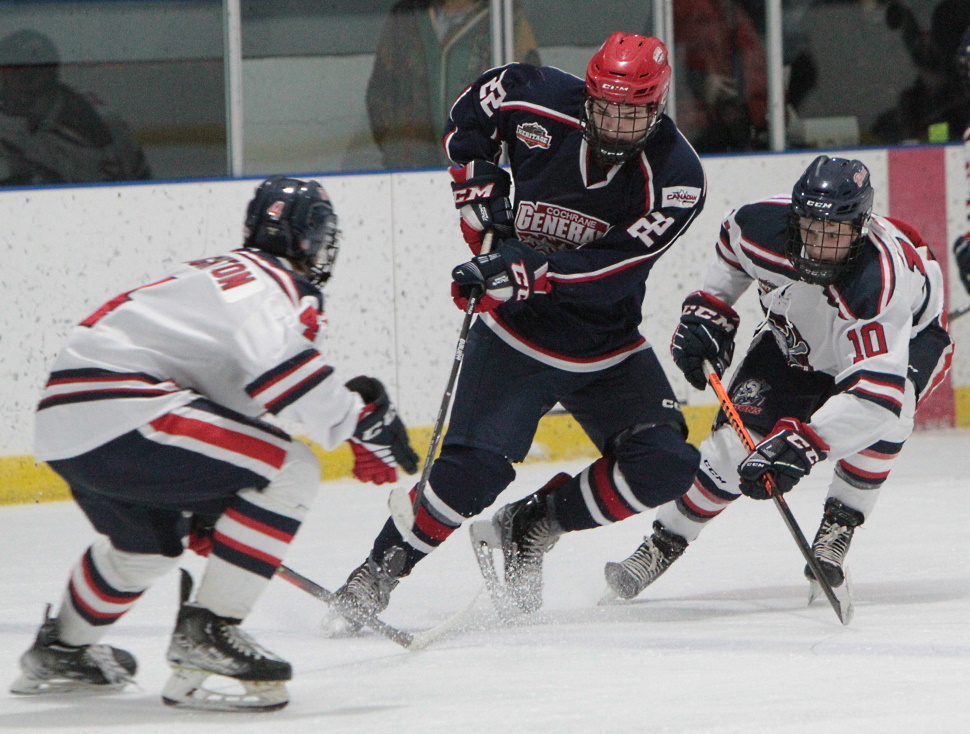 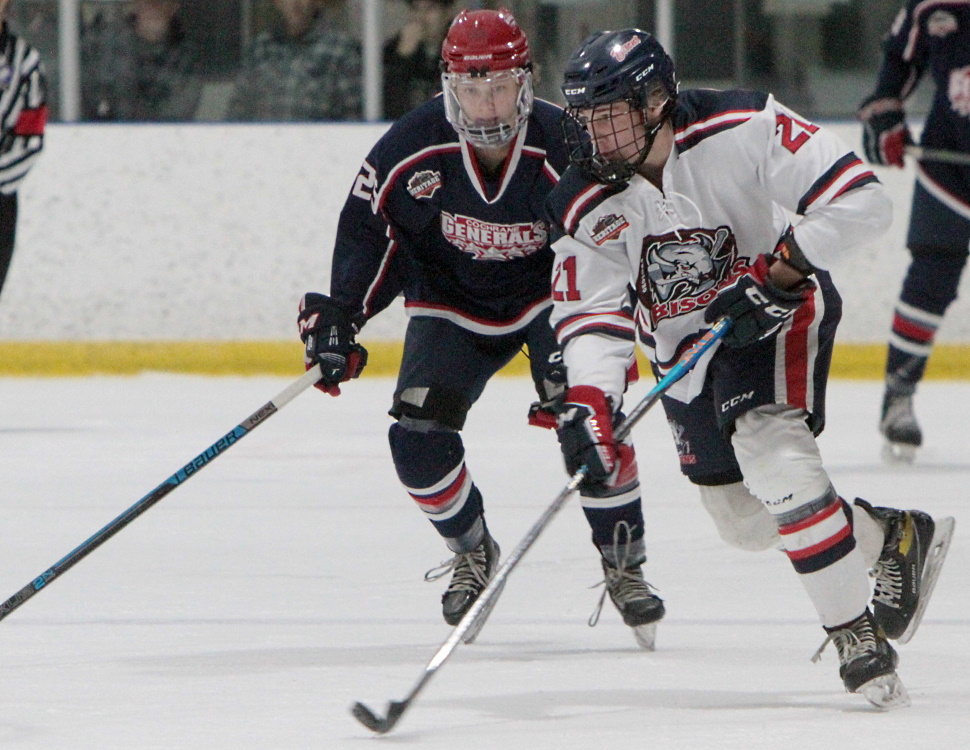 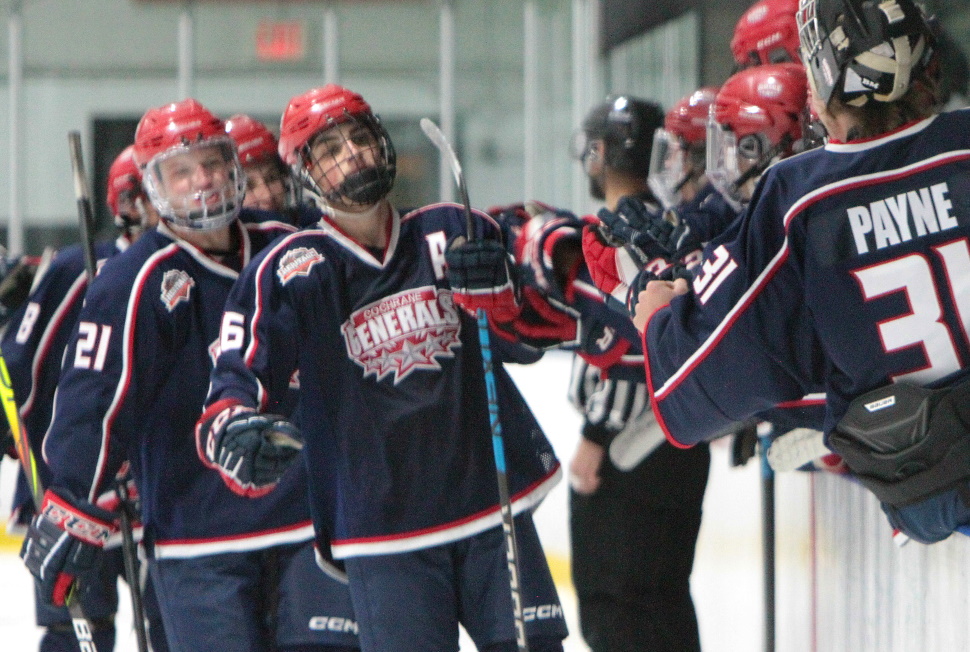 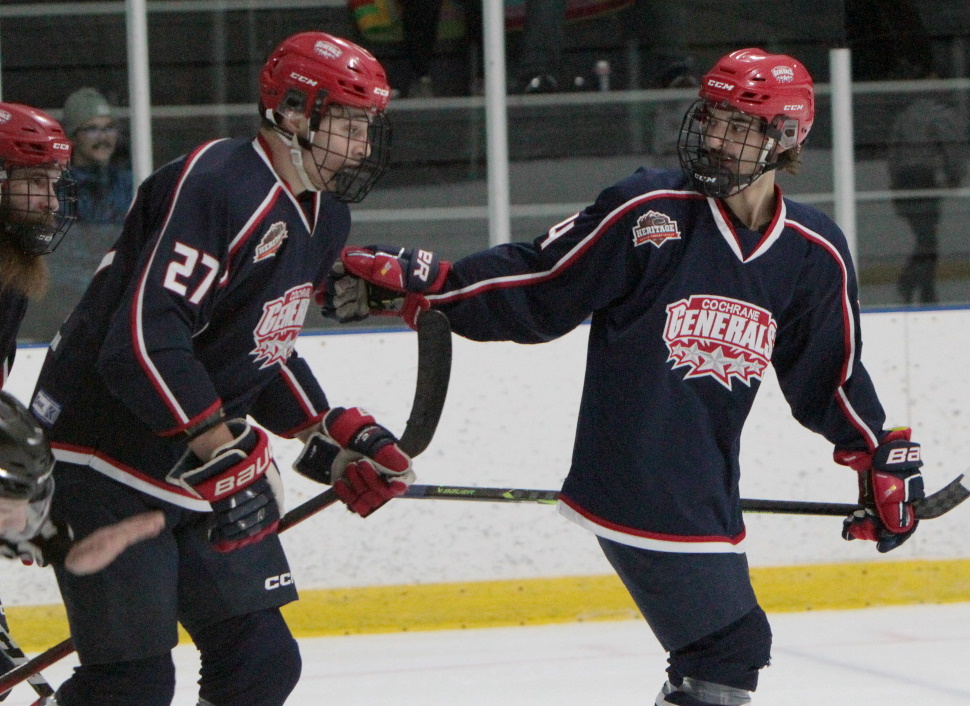 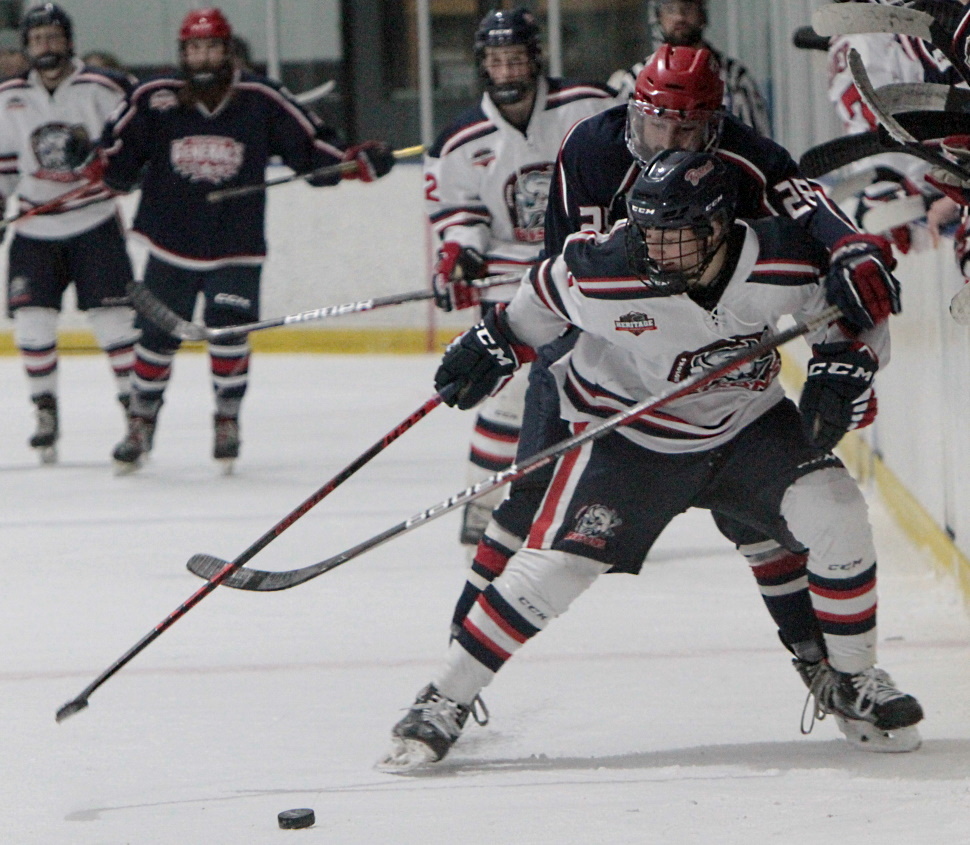 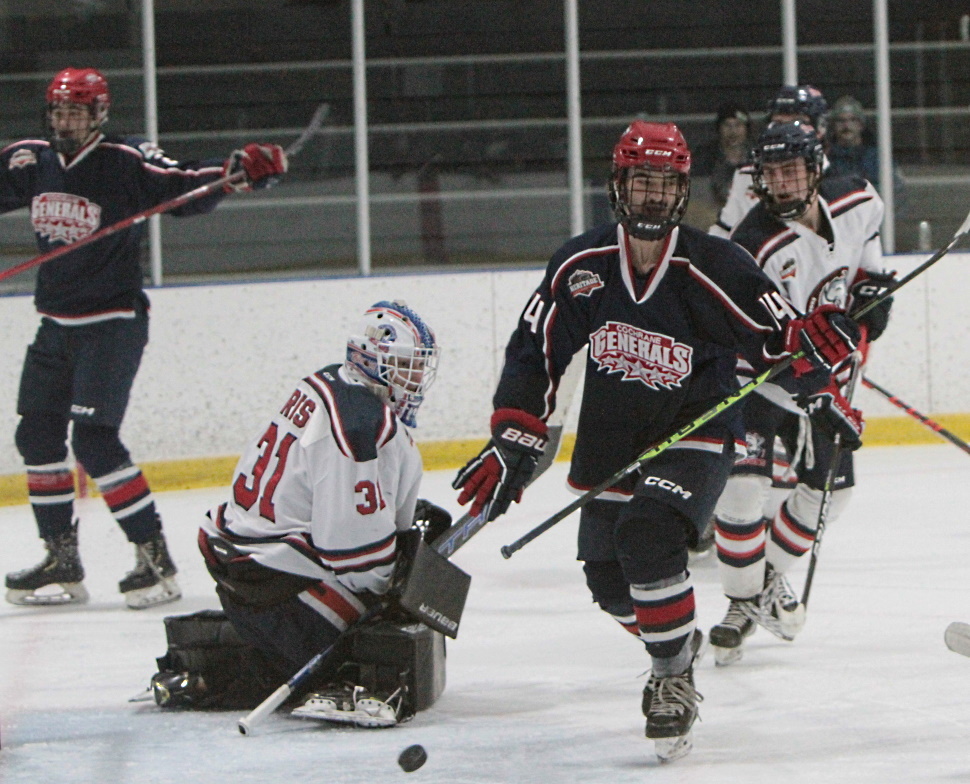