Crossfield Demolition Derby is back!

At the grounds there will be food trucks and liquor sales. Gates open at 11 a.m. and the derby starts at 3 p.m. A cabaret will take place afterwards with a live DJ.

Event organizer with the Crossfield Elks Brandt Selent says attendees can expect a good time  "Expect some smash em’ crash em’ electric action with that we're doing a bunch of Derby car heats. First off, we start with the big cars and then we move to small trucks, small cars and then big trucks. They go into the Derby arena and smash each other up"

As well as the derby itself Selent says that there will be events going on in between the heats.

"There are little events going on in between the Derby. We're hoping to get a little 50cc bike race going on with some kids to race around to win a trophy, and we've got some other mud trucks coming in to run through the mud pit that we have on the grounds."

All proceeds from the event will be dispersed back throughout the community of Crossfield. 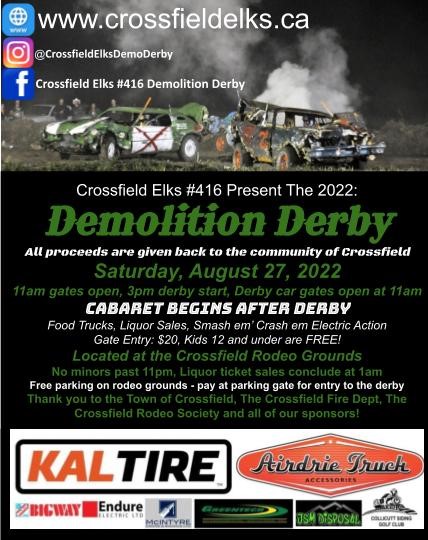