Face masks will become mandatory in indoor public places or public vehicles in Cochrane should the number of active cases of COVID-19 in Cochrane rise to10 or more.

Both argued the town should strongly recommend the use of masks but believe making it mandatory is a dangerous attack upon personal freedoms and responsibilities.

"There's all the difference in the world between recommended actions from the town, to mandatory responses," said Councillor Wilson, "and I would be heavily in favour of recommending masks and not legislating them."

Councillor Tara McFadden said the bylaw is conservative, yet pro-active, in nature.

"The worse case scenario if we don't do this is somebody could actually die," said McFadden, "and I don't know that I could look somebody in the face and say we didn't do our best."

Bylaw 20 gives Stacey Loe, director of Emergency Management, the authority to immediately implement mandatory mask wearing in all public places should the number of active cases rise to 10 or more.

Enforcement would be stepped up and $100 specified fines will be issued to those who don't comply.

It would be deactivated when the number of active cases are reported to be below 10 for 14 consecutive days.

By Alberta Health Services (AHS) standards, that is below the "watch" designation where provincial health officials would discuss possible need for additional health units.

For Cochrane, we would have to have more than 15 caes to be in the watch category.

Early in the discussions, Councillor Marni Fedeyko proposed the ideal of offering enhanced COVID-19 education when the number increased to 10, then make the masks mandatory at 15.

She was particularly concerned for it further impacting local businesses, who were already being impacted by the virus and the economic downturn.

She did lead the successful charge on eliminating a section of the bylaw that required business to post a poster prepared by the town if masks became mandatory. The sample provided to council reads "Wear Your Mask Here. Everyone must wear a face covering in indoor public premises or a public vehicles."

Opposition to making the bylaw open ended also saw the timeline put in place. The bylaw is now in affect now until Feb. 1, 2021. Administration will likely bring it back to council for discussion prior to that day.

Mayor Jeff Genung says the bylaw puts the ball back in the court of Cochrane residents.

"The responsibility is firmly on the community of Cochrane to keep the caes below 10," he said.

He continues to encourage people to remain kind.

Currently, there are six known active cases of COVID-19 in Cochrane.

The entire face mask question was forced by the City of Calgary, the hot bed of COVID-19 in Alberta. Their new face mask bylaw comes in effect Aug. 1.

Airdrie and Okotoks councilors have met on the question, and have followup meetings scheduled. 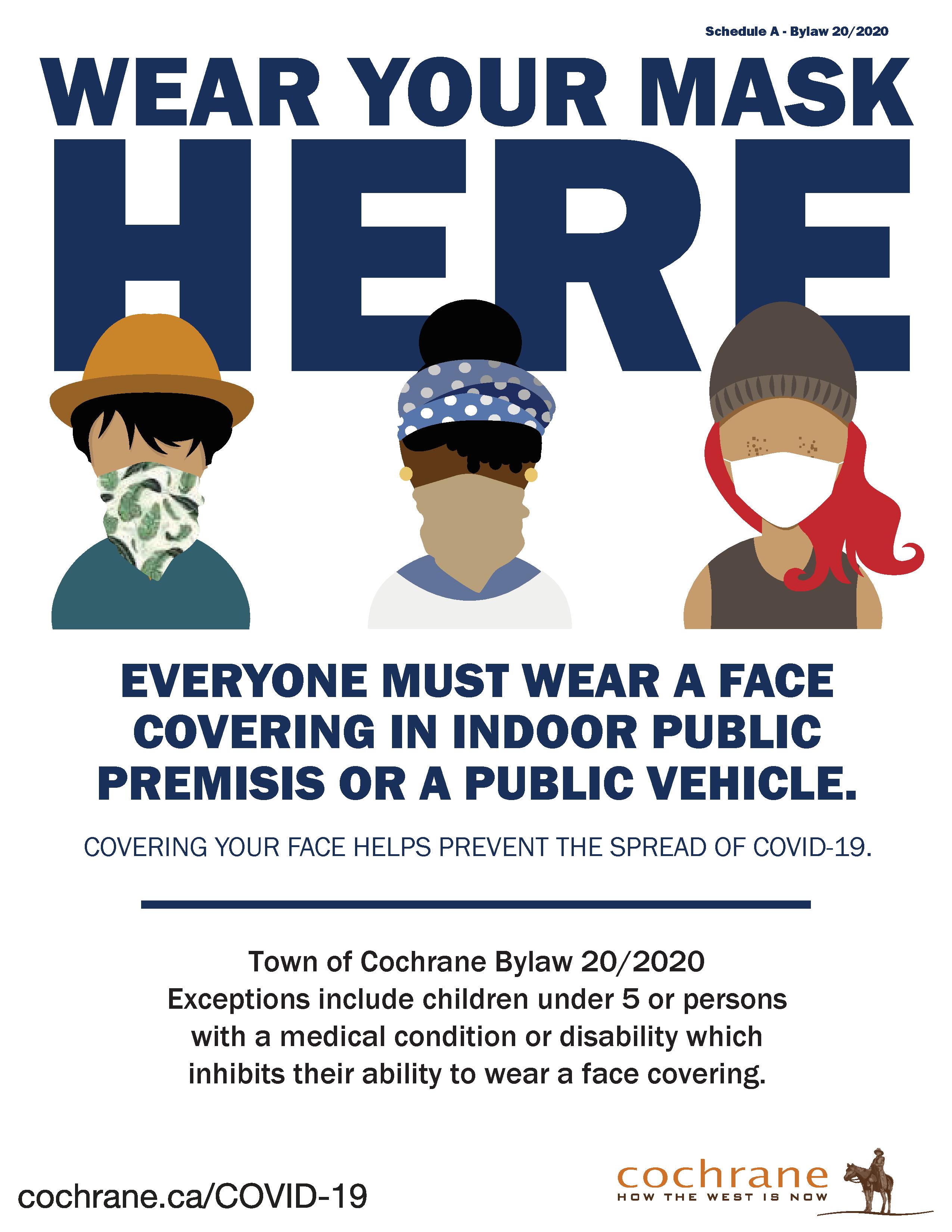 Council was given this sample of a poster the town will distribute should face masks become mandatory in indoor public spaces. Businesses would have the choice as to whether to post them.

Council set to discuss the use of mandatory face masks