The Airdrie-Cochrane constituency association for the Wildrose Independence Party of Alberta (WIPA) has got off to a strong start with its inaugural AGM, believes party president Rick Northey.

About 25 people attended the meeting that saw eight people elected to the board.

"It's been the best one that I've personally attended," says Northey. "There were the most ballots cast, the most people attended and I think eight people on the start board is, I think, the best."

The new party was formed this summer when members of the Freedom Conservative Party and Wexit Alberta voted to merge. Now the party is in the midst of holding several inaugural AGMs to form riding associations across the province.

Northey says they are aiming to have 20 completed by the end of the year and has continued to build its membership. Before the next Alberta provincial election, expected in 2023, WIPA hopes to have double that number of riding associations and candidates. At this time, he says they don't anticipate having candidates in all 87 electoral districts when the election rolls around.

The party is scheduled to hold its annual general meeting on Jan 23. Its constitution, bylaws, and board election will be on the table. Northey hopes at that time they will be able to announce their leadership and policy convention.

Among those already declared to be entering the race is interim leader Paul Hinman, who was the guest speaker at the Nov. 6 meeting here in Cochrane.

Hinman has been politically active since age 14 and played a role in three political parties in the province, most notably as the first leader of the Wildrose Alliance, predating Danielle Smith and Brian Jean. He was the leader of the Alberta Alliance party when it merged with the then unregistered Wildrose Party of Alberta.

Hinman says his belief in a sovereign Alberta is a reflection of how times have changed, He says his entire career has focused upon giving Alberta autonomy, dating back to his involvement with the Alberta First party, which over time evolved into the Freedom Conservative Party.

"It was always about autonomy," says Hinman. "One of the things that we had early on was a sunset law that equalization payments would drop 20 per cent over five years, and then it would be done with."

He believes the deregulation of the oil and gas industry actually oligopolies the industry and squeezed out smaller companies and discouraged entrepreneurs.

"Their values are not our values. We believe in merit, we believe in seeing someone excel and reward them for it. Out there, when they see someone excel, they want to punish them, take it away and redistribute it and give it to someone who maybe isn't doing so well, or isn't willing to work."

It took several attempts by the party to persuade Hinman to come out of retirement and become interim leader, says Northey.

"He's a known quantity. He's rational, sane, and a good communicator. He's not a radical right-winger, which is what we wanted to avoid."

Hinman knows what course he would like to take if the Wildrose forms the Alberta government.

"My personal goal at this point would be to put our house all in order during the first two years, and show Albertans, you know, this is what we have, everything is safe, our boat's built and it's sailing and we're doing well. Then ask, "Now, what do you want to do?"

"Some hard separatists just want to vote, and display their anger. That's not my personality. It's logic safe steps to where we need to get, and then let Albertans decide."

He says polls clearly indicate Albertans do not currently have an appetite for separation. The party wants to prove it is a viable option.

"Right now, we're pretty confident with all the polling if we had a vote today we wouldn't win. Why? Well, because what are we offering Albertans? Just that we're mad, we want to leave and we're a teenager, and give us the keys to your car and your credit card so we can leave? We need to have all of these things--our revenue agency, our policing force, our employment insurance, our pension plan---built and stable and working here, I believe, and then let Albertans decide."

Northey says Hinman made it clear from the start if he was to serve as interim leader, he wanted the opportunity to run for its leadership.

Hinman says he has been failed before by previous successors.

"It was one of the conditions that I came on with is that I'm not just going to pass it off like I've done twice in the past. I don't want to be here, but unless I can find someone that I actually truly believe can do what needs to get done, I will continue and run for the leadership when the race comes forward." 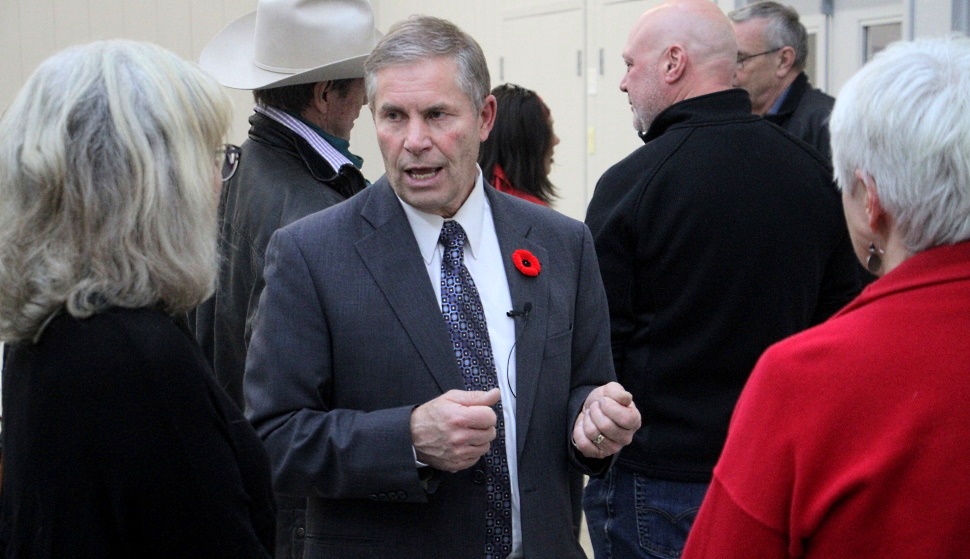