Hydrogeologist and geoscientist Dr. Jon Fennell believes measures need to be taken to protect the Big Hill Springs Provincial Park from a proposed gravel mine near the park boundary.

On Tuesday, Mar. 2, Rocky View County is holding a public hearing for the proposed Summit Pit of the Mountain Ash Limited Partnership (MALP). The 323-acre property is on the northeast corner of Hwy. 567 and RR 40.

Mountain Ash is seeking the approval of both its master site development plan and the rezoning of the parcel to direct control from agricultural, general.

Based upon a report on the hydrogeology, geochemistry, fish and aquatics, and climate change of the Summit Pit, Dr. Fennell proposes a setback of 1.6 km around Big Hill Springs Provincial Park, where no gravel development would be allowed.

He recommends an additional 1.6 km of gravel mining restrictions should be established to limit excavation to within four metres of the water table, as opposed to the typical one metre.

Fennell believes the removal of up to 20-30 metres of gravel will significantly reduce the ability of the aquifer to filter out natural and/or introduced contaminants that will occur as part of the development.

The exposure of the sand and gravel will increase its ability to weather and release harmful trace elements into the groundwater, such as arsenic, cadmium, selenium, and other elements. Fennell says MALP has indicated traces of these elements are already in the water, which increases the risk of further contamination during and following pit development.

The Big Hill Springs Creek eventually flows into the Bighill Creek and provides 50 per cent of its flow. Bighill Creek travels through Cochrane into the Bow River In particular, it's a predominant feature of the Glenbow neighbourhood.

It concludes the proposed aggregate extraction would not pose any significant or adverse impact on the existing confined or unconfined groundwater because the aggregate resources would be excavated to a depth of one metre above the groundwater depth.

If its master site development plan is approved, MALP would be required to submit new groundwater readings at the development permit stage.

In addition, a two-year groundwater monitoring program has been undertaken, and the company has made the commitment for additional monitoring on a quarterly basis for the life of the project.

Mountain Ash says it will provide a 24-hour number for neighbours within the immediate vicinity to report issues with groundwater relative to aggregate operations within the MSDP area. In addition, it will promptly investigate any community concerns it receives about groundwater wells in the vicinity of its operations.

A habitat preservation area is proposed in the southwest portion of the property that will remain undisturbed. Additionally, the existing wetlands situated within the northwest corner will be retained and are not expected to be disturbed.

Aggregate products excavated within the site will be crushed, screened, and shipped to markets around Balzac, Calgary International Airport, and north Calgary growth areas.

Mountain Ash anticipates a 30 to 40-year operating span, developed in a series of stages. Reclamation of the pit will be phased and will follow closely behind discontinued mining operations, with a maximum of +/- 40 acres open for excavation at any one time.

The site will be returned to agricultural uses upon completion.

The B&A Planning Group prepared the master site development plan for MALP. It did not respond to a request for further insight on the proposal as it pertained to the park, its springs, and the Bighill Creek. 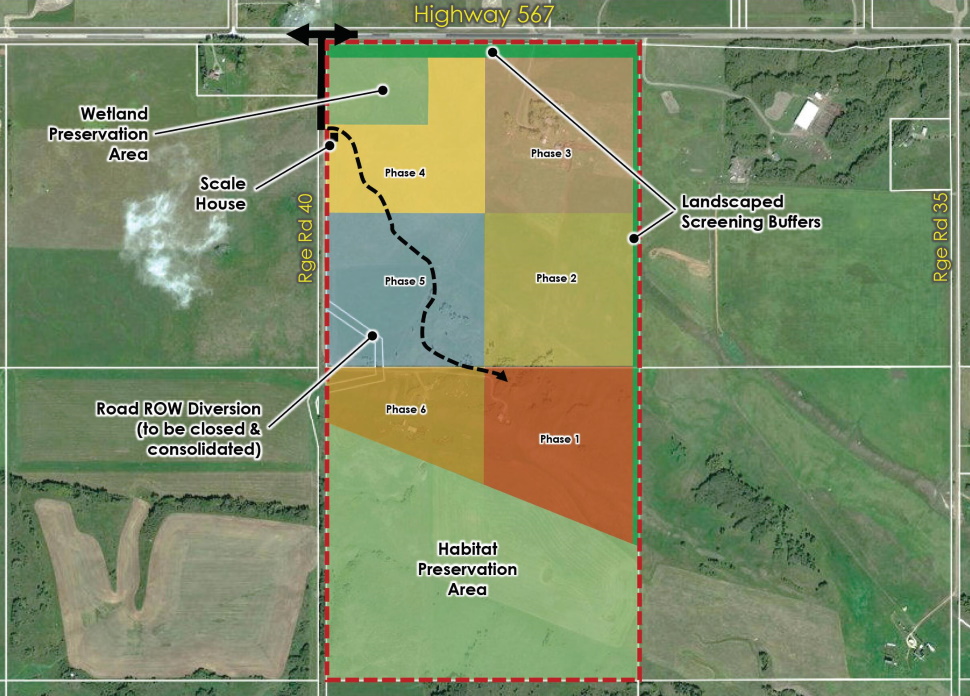 The phasing plan for the Summit aggregate mine proposed by Mountain Ash.

What's that one household chore that you just can't stand?