Memorable years of hockey on both sides of the border

It's been six months since Cochrane's Daria O'Neill hung up her skates after five years of university play on both sides of the border.

O'Neill takes with her many great memories of her sport of passion, but she's also pleased to see opportunities improving right here in Canada for university play without having to go stateside.

Her university career ended in early March with a bittersweet win with the Mount Royal University (MRU) Cougars in their opening game of the USports national championship. Seeded seventh in the tournament, the Cougars surprised the second-ranked Toronto Varsity Blues in the first round at the Charlottetown, PEI tournament. The thrill of the victory came crashing down quickly when the tournament was cancelled immediately afterwards due to COVID-19.

"We weren't really expected to win any games. A lot of people would say it was an upset, but to us, we felt we belonged there."

Forever they will be left with the question, "What if?" No matter, O'Neill is proud of what the team accomplished.

"It makes me sad but it also makes me really proud that we could have brought home the first national championship for our program. That would have been pretty amazing."

"We had such an outstanding season. I couldn't have asked for a better finish to my career, aside from nationals being canceled part way through, of course. It was a tremendous experience for me."

It was hockey that brought O'Neill to Cochrane so she could attend the Edge School in grade 10 after a short stint in Edmonton. She hailed from Carlyle, SK, where hockey is king.

"It was what we did. When kids were old enough to walk, you'd put them in skates and let them try hockey."

It didn't hurt that her second cousin is Brendan Morrow, who had a 16-year career in the NHL after being drafted by the Dallas Stars 25th overall in 1997.

"I idolized him a little bit when I was younger. He was a hometown hero when I was in Carlyle. That drew me to the sport, and then I just stuck with it since I was four-years-old."

Playing for the Edge School opened the doors for several scholarship offers stateside. She played defence for the University of Vermont VCats for three season before returning to Canada. With the Cougars, she was an alternate captain in her first year back in Canada, and captain in her final season.

"Really, every one on our team was a leader in their own way, so that made it easy for me."

She praises Cougar head coach Scott Rivett for the solid hockey culture he has created of good people supporting each other. She believes creating that strong relationship off the ice transferred to the quality of play on the ice.

"I honestly believe it is one of the best programs I've been a part of."

Things have changed since she pursued a university hockey scholarship.

Being pursued by many top American universities, she took a swing east with her mom during Easter break in grade 11 to visit universities before committing to Vermont.

"You get to talk to a bunch of different schools, and they try to woo you, in a sense, and tell you what they have to offer. I think that was something cool I got to experience and a lot of female and male hockey players get to experience."

Having played on both sides of the border, she's noticed the disparity in university female hockey programs is fading.

"When I was being recruited, a lot of girls were being pushed to go down to the United States, and now I think the competition and level of play in Canada is comparable to what's happening down south."

O'Neill hasn't laced up since the national championship but you know she'll return to the ice.

Still, that's it for competitive hockey.

"I'm just going to take a year off to relax. I was hoping to join our Cougars alumni beer league team this year, but there's nothing too serious on the horizon."

As for the future, she hopes to one day return as a coach at the Edge School, and perhaps further down the road with MRU. 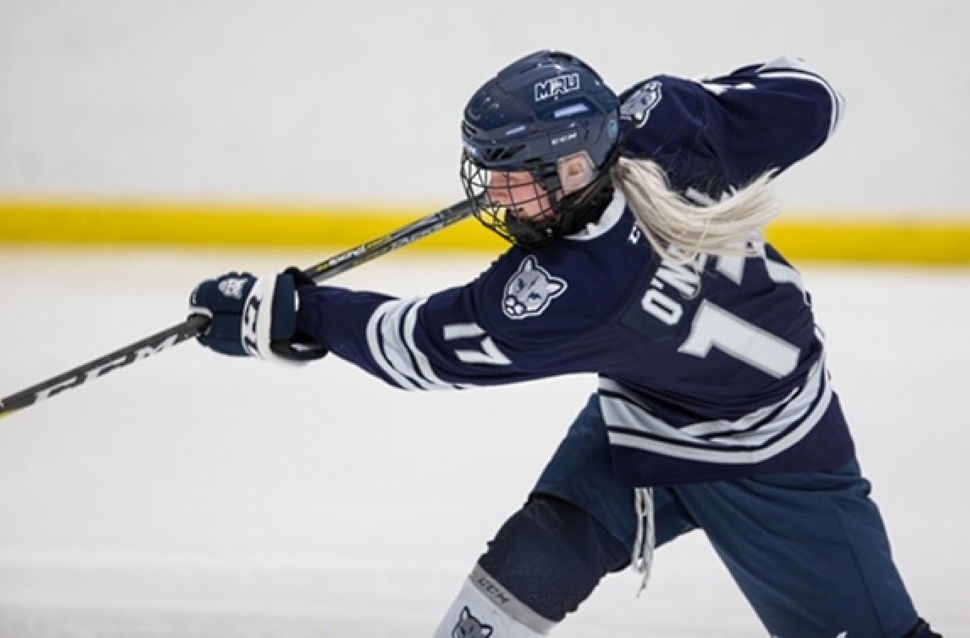 Daria O'Neill played two seasons with the MRU Cougars and was team captain in her final year.

Despite the lack of organized sports and fitness, Cochranites are finding ways to stay active outdoors

Despite the lack of organized sports and fitness, Cochranites are finding ways to stay active outdoors

Impending polar vortex not as bad as it sounds