Cochrane and Area Victim Services is well on its way to purchasing a NOA humanoid robot.

The robot will be used to help support children through the police and court process.

This type of robot has been used in hospitals in Canada and the U.S. as well as by Red Deer Victim Services.

Executive Director of Cochrane and Area Victim Services Lauren Delahunt says the main goal of the robot is to provide daily support to young victims of crime and trauma as they progress through the legal process.

"It's essentially a tool to redirect children's memories and their mindset and they've done a lot of studies to show how beneficial using the robot can be and so it's kind of taking what potentially could be a negative experience and being able to direct that in a different way."

The robot can be used for a wide-range of purposes including anxiety & coping, pain, physiotherapy, hospice care, surgery, burn services, mental health and counseling.

Delahunt says it's simple to operate the robot that is just under two feet tall.

"It operates through a software program on a tablet and this enables the robot to be operated by staff, volunteers and even children. So you can program the robot and simply by the push of a button it can run through processes and if we know ahead of time who our clients will be or who the children that we're helping, it can actually speak to them."

The robot can engage in a variety of behaviors including dancing, telling stories, playing games and taking part in activities such as fist bumps.

She says she's seen the benefit of the robot first-hand.

"I was able to see this through my son going into Alberta Children's Hospital. He had a simple day procedure but he does not remember dealing with the doctors, the needles, being wheeled into the operating room. He remembers the robot."

Funds have been acquired through the community from fundraising events.

They are hoping to purchase the robot and have it operational by fall. 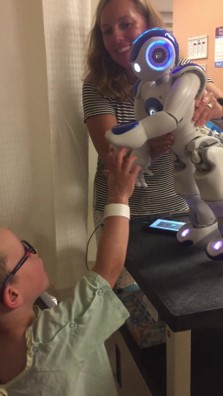 Protocol for COVID-19 testing changing in the province

The McCafe Coffee Break gets gnarly at Shredz Shop