Santa's Sleds spread a little of that Cochrane Magic

Ear-to-ear grins were commonplace on a sunny Sunday, Dec. 20 when 350 sleds were distributed to Cochrane area youth at Cochrane Toyota.

After motorists received instructions from members of the Young Professionals Rotary Club, they rolled up to the front of the dealership to be greeted by Santa, Head Elf Mayor Jeff Genung, Alex Baum, and others, then received their quality German-made sled from Santa's Sleds for Christmas program.

For Cochrane Toyota principle dealer Alex Baum it was part of the magic so prevalent in the community.

"I call it "The Magic of Cochrane," says Baum. "This is the community that we're so proud of. If anybody comes up with an idea, there's always a team that comes in to support it. Good ideas are as only as good as the delivery of them, and this town is so good at doing that."

Since mid-November, nominations were welcomed for deserving preschool age in the area to receive one of these sleds. It has been a hard year for Cochranites and many were suffering from the ill-effects of Alberta's sagging economy even before the COVID-19 pandemic.

The smiles of the youth and parents made it all worthwhile, says Baum, himself beaming.

"All good plans, sometimes take some time, and here we are today, Dec. 20th, five days away from Christmas, and look at all the smiles. Our staff, the community support that we got, and Santa's here--look at the smile on Santa. It's just wonderful!"

Mayor Jeff Genung was hard at work as Santa's head elf and says he wouldn't have missed it for the world.

"I'm overwhelmed," says Mayor Genung. "It's been a very emotional day. The families have been so grateful for the gift of a sleigh. This type of an event at this time of the year, I'm just so happy to be a part of something and being able to see people and just being a part of the giving of Christmas."

"The kids are ecstatic. To see Santa and a goofy elf handing them something for Christmas, they're just overwhelmed with joy. And their parents are emotional. They're very, very grateful."

Tanis and Kody Mitchell, of Okotoks, were among those grateful for the gift of the sled. They attended with daughters Berlynn, 5, and Lukah, 3.

Against the odds, Lukah survived a rare multiple organ transplant surgery on Dec. 16, 2018.

"They told us she had 24-hours to live, and she waited for seven weeks and got the transplants.," says mom Tanis. "It's now been two years, and she's doing awesome."

It was back then that Cochrane Toyota first reached out to the Mitchell family.

"We didn't have a connection to Cochrane Toyota until Lukah got sick and then they supported us," says Tanis. 'They bought us Christmas presents two years ago and then called us with the sleds this year. Even though it's been two years, they still remembered us and felt connected to our story, and that means the world. The girls get so excited when stuff like this happens."

Baum says over 350 nominations were received for the sleds, but in the end, all requests were met.

"We actually we're able to fill all the orders. Some that we're going to come to get 'em said there must be some others who need it more than they did, so they regifted it before they even got it. That was kind of neat to see."

Santa got more than waves from his adoring fans. He received at least one letter from a youth receiving a sled. 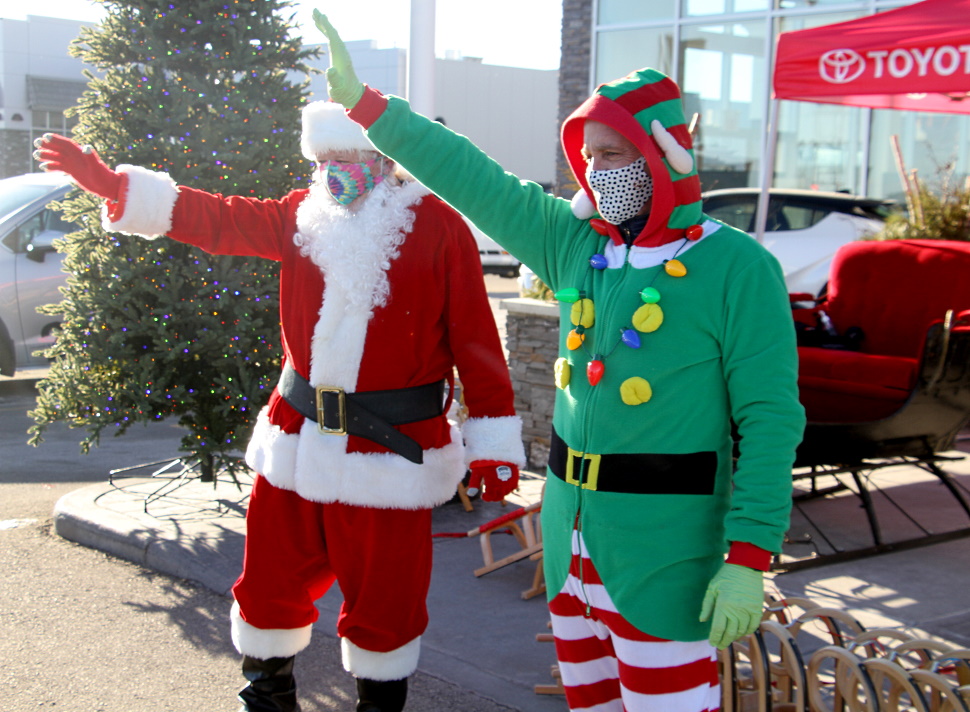 Santa and Head Elf Mayor Jeff Genung waving to a family after they received a sled. 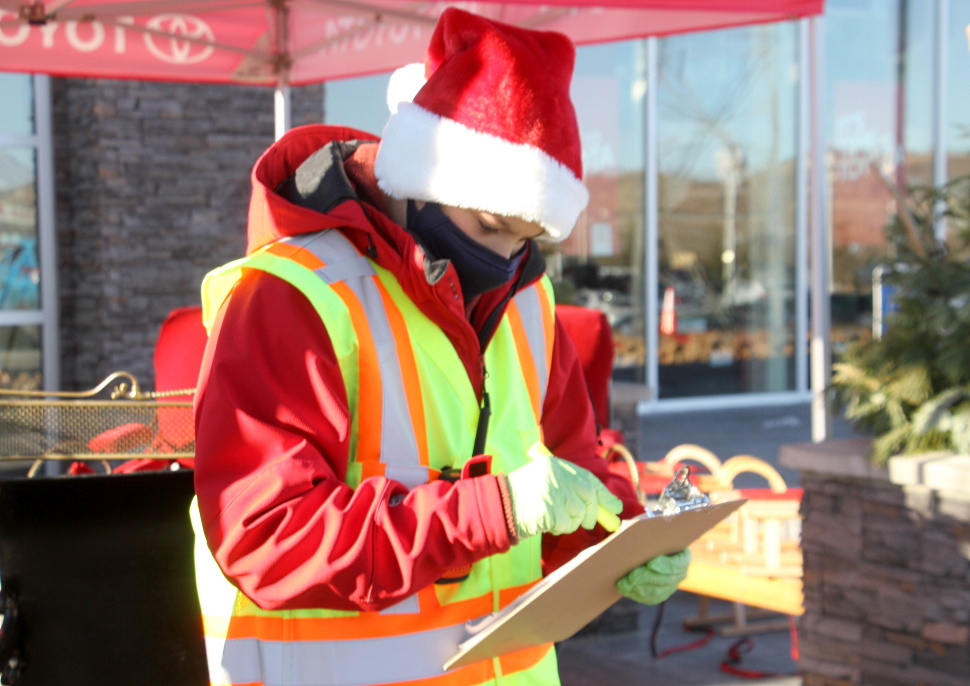 Beckett Baum helped to keep track of the distribution of the sleds. 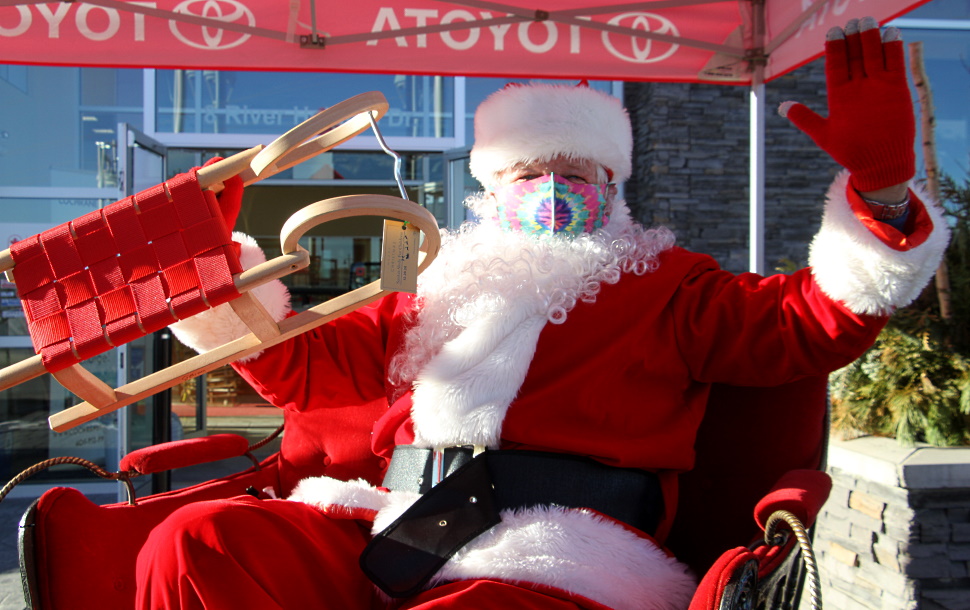 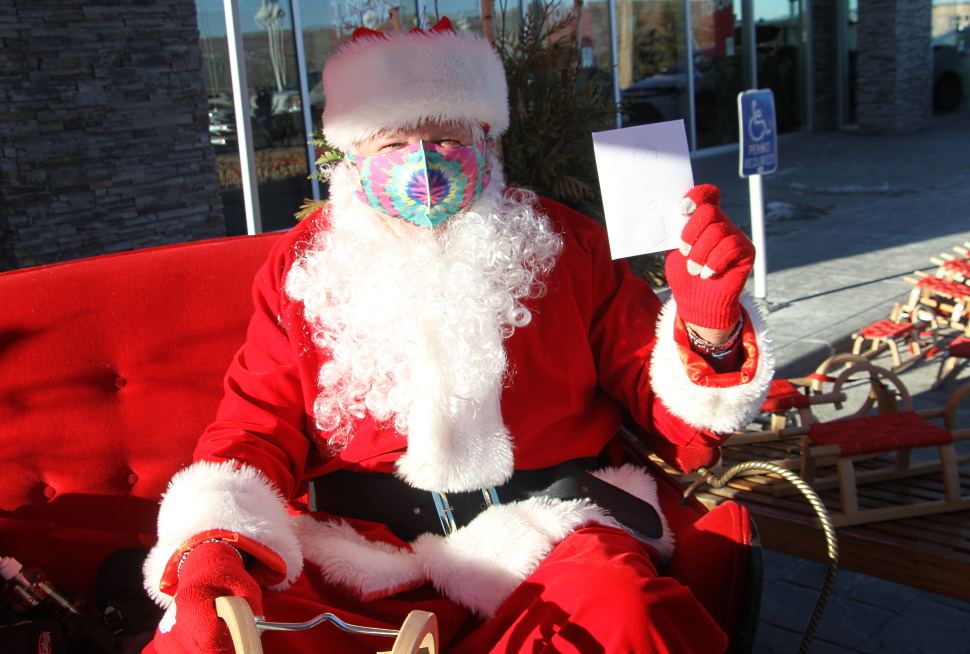 Santa receives a letter from one of the youth receiving a sled. 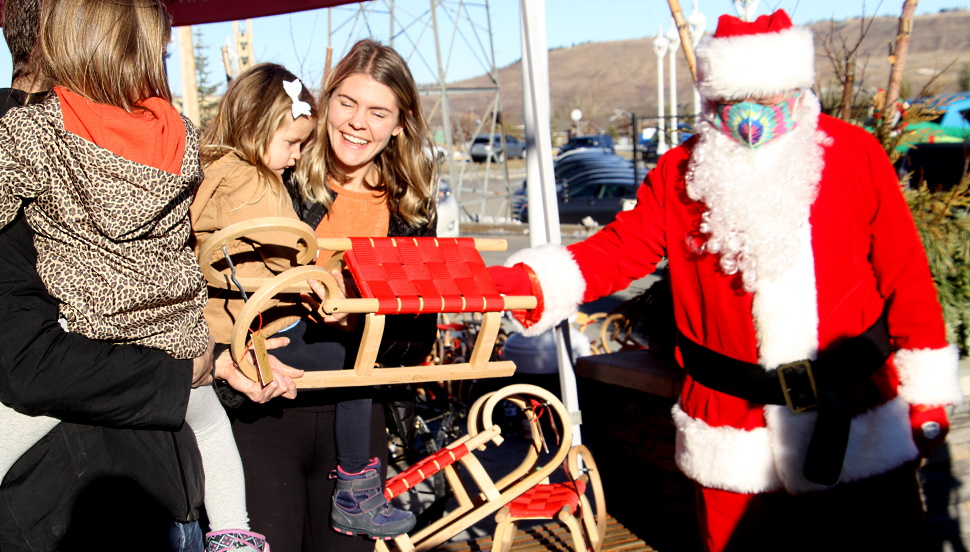 The Mitchell Family, from Okotoks, were among those receiving a sled. From left, dad Kody with daughter Berlynn and mom Tanis with Lukah. Now 3, Lukah survived a rare multiple organ transplant procedure in 2018. 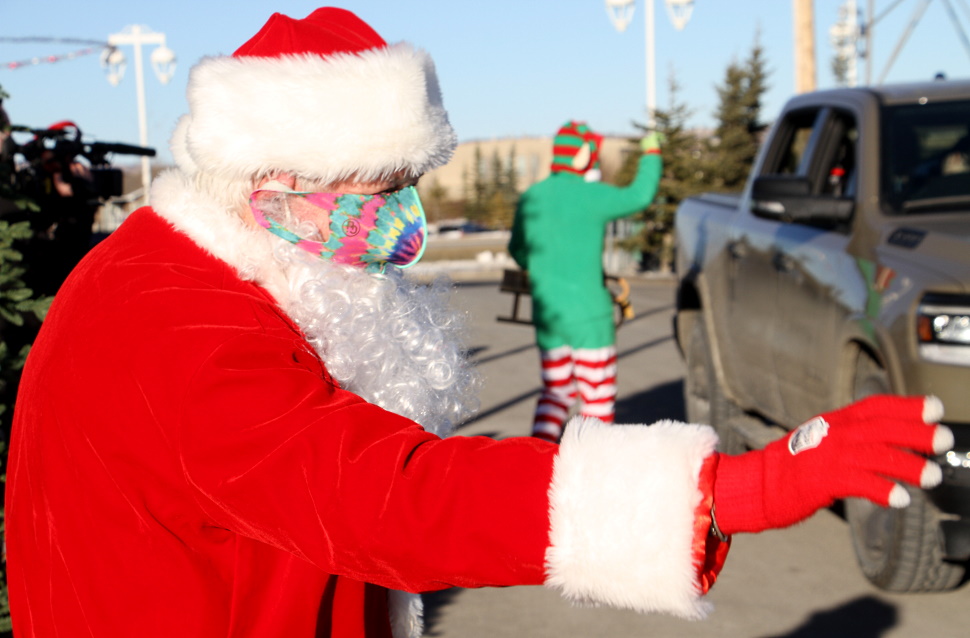 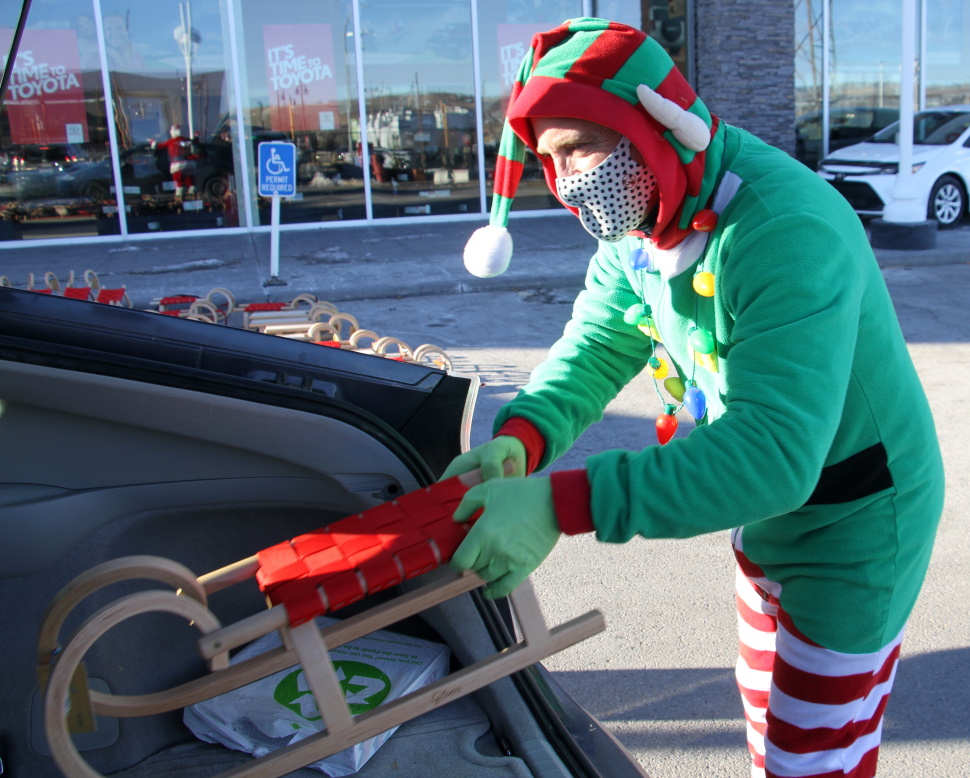 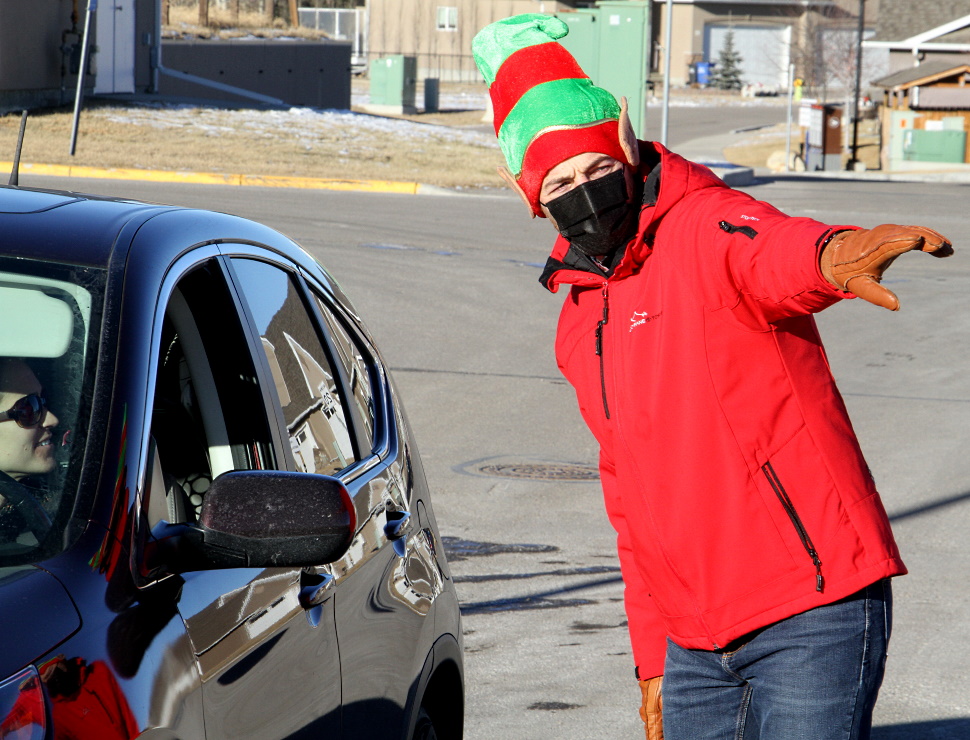 Ryan Baum, president of the Young Professionals Rotary Club, was among those providing instructions to families picking up sleds. 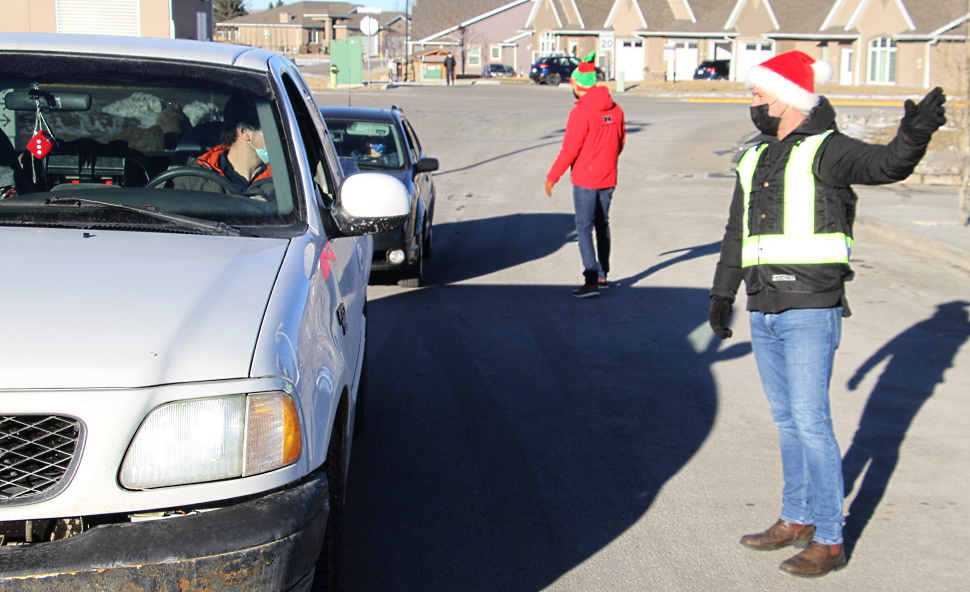 Tyler Hebblethwaite, foreground, of the Young Professional Rotarians, and Rotarian Ryan Baum provided directions and instruction on how to pick up the sleds.
Previous Next