Cochrane RCMP are searching for at least two suspects who attempted to crack open an ATM inside a Bragg Creek gas bar around 1 a.m. this morning (Mar. 22)

The suspects were ultimately not successful and fled the scene before police arrived, explains Cpl. Bethany Hoskin in a news release.

From surveillance images, one of the suspects appears to be brandishing a firearm.

Suspect #1 is described as holding a sledgehammer and wearing black pants, a camouflage jacket, orange gloves, and a balaclava covering his face.

Suspect #2 is described as holding a firearm, wearing blue high-visibility coveralls, a dark hood, light-coloured gloves, and a black balaclava.

The suspect vehicle appears to be a grey or silver Chevrolet extended cab truck.

If you have any information on his whereabouts, please contact the Cochrane RCMP  at 403-851-8000.

If you want to remain anonymous, you can contact Crime Stoppers at 1-800-222-8477 (TIPS), online at www.P3Tips.com or by using the “P3 Tips” app available through the Apple App or Google Play Store.

Photo of the suspects vehicle 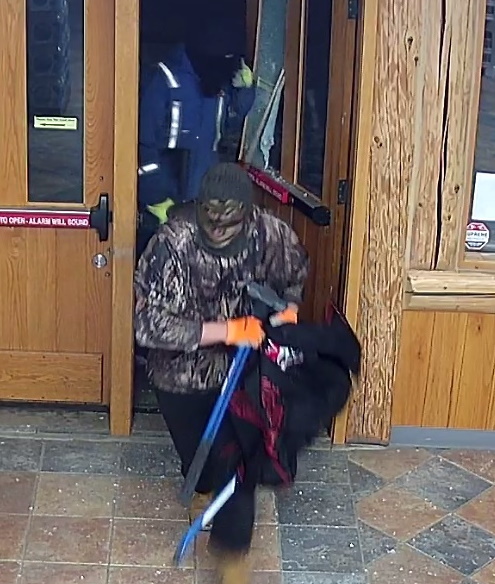 Will the weather outside be frightful for Halloween?