You can't help but notice the shaggy beard of Dillon Dube while watching the Flames playoff run, and it's especially prominent because of the success of his line.

That beard is causing a sensation among fans, including one currently Down Under.

Yesterday, Flames fan Mandy Morrison shared on Twitter a design she prepared to salute Dube's full beard and impact on game one of their NHL playoff series against the Dallas Stars.

It shows the fully bearded Dube in his Flames jersey with the great catchline "Fear the Beard."

If there was a live audience, you can be sure they'd be plenty of fans armed with placards bearing those words.

The night of the game, she tweeted a picture of Dube scoring his second goal of the night against the Stars with the words, "Dube, you beautiful Viking prince!!"

Growing beards for playoffs have become commonplace in some professional sports, and typically a topic of discussion among fans.

Dube says he got a head start on his during the COVID-19 break.

His line has been on fire and hopes to keep rolling tonight in game two of the best-of-seven playoff series.

Dube scored the first two goals in game one, one on a powerplay, the other unassisted. In the playoff qualifier, he had a goal and assist against the Winnipeg Jets. 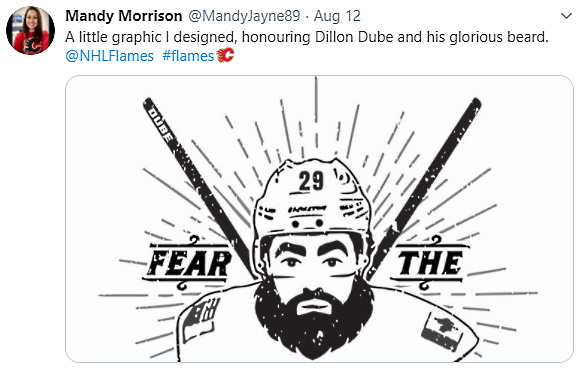 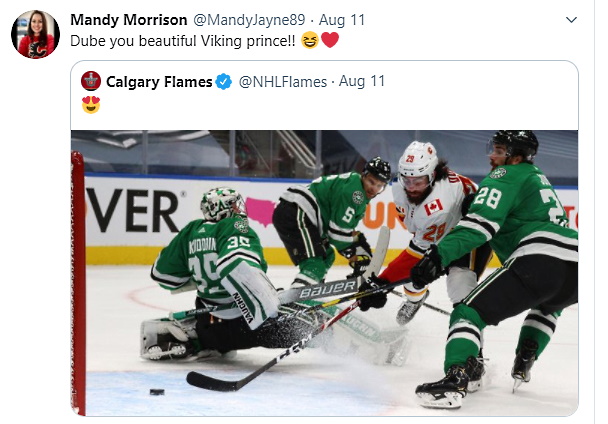 Six hours left to save 33% with Grab A Gift Card