Cochrane high school basketball teams made gold medal finals in all of the Rocky View Sports divisional finals, and two of them have returned with banners.

The junior boys Bow Valley Bobcats added a little more icing to their cake in their rebuilding season. They won bronze by defeating the Bert Church Chargers 77-60.

"We are riding high," says Bobcats head coach Wade Horb. "At the Christmas break, the boys said that success would look like winning third as they were 1-3 and determined to be better. They did just that."

It has been an exceptional season so far for the junior boys' Cobras, too. Not only did they go undefeated in divisional play, but they also won a 4A and senior varsity tournament.

"We've had a great season with a really strong group of players," says head coach Derek Cooper. "Our students work incredibly hard. They're passionate, they're here early for early practices, and they stay late. They're an awesome group of kids."

He gives a shouts out to the leadership of captains Sam Smilski and Evan Simm as well as grade 10 players Max Sauter Sahib Sanghera, and Evan Ficzere.

"We've had a lot of grade 10s step up and lead the way, and a really strong cast of grade 9 players that are going to be the future of our program."

Among those grade 9s in Zack Duncan who in their semifinal game against the Springbank Phoenix scored 51 points.

"That was one of the best games we've seen out of a JV boys basketball player in a long time."

He also saluted the improvement made through the season by the Cavaliers.

"It was so much to play them in the final. We'd seen this twice this year already. When we saw them on Saturday, their improvement was incredible. They have a bright future."

The junior girls' Cobras topped a three-way tie for second in the regular season, and worked their way to the final, defeating the George McDougall Mustangs, 73-49, and the Springbank Phoenix, 44-41.

Undefeated in the regular season, the senior boys' Cobras got a bye into the semifinals, where they defeated the Bert Church Chargers 84-73.

Down two starters, they lost the gold medal to the Chestermere Lakers, 63-49. The Lakers were second in league play with just one loss to the Cobras by the slime three-point margin.

The Bow Valley Bobcats went undefeated all season until the gold medal game, where they lost the Croxford Cavaliers, 69-60, in overtime.

"We're a really defensive team, and they scored 25 points against us in the first quarter, so we got behind 17 points early and spent the whole game battling back."

The Bobcats grabbed a five-point lead with three minutes remaining, but the Cavaliers fought back to tie the score. The Bobcats failed to score on two free throws with three seconds left, and the game went into overtime.

Finishing first in their division, the Bobcats entered playoffs in the semifinals, where they defeated the George McDougall Mustangs, 40-37.

Zone playoffs get underway today for all four divisions and continue into the weekend. 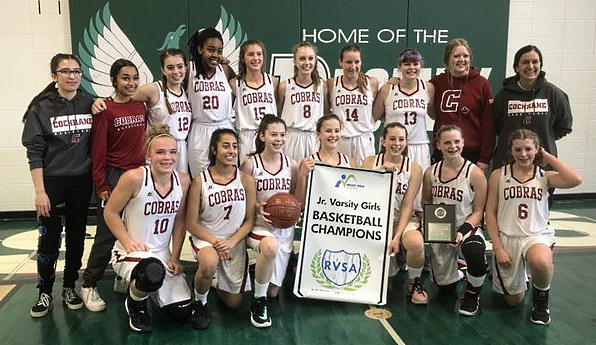 The Jr. Girls Cobras won the divisional banner against the Croxford Cavaliers. 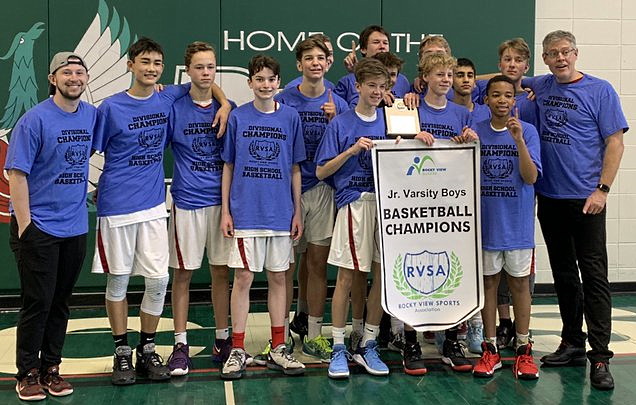 The Jr. Boys Cobras won the divisional banner against the Croxford Cavaliers.
Previous Next

The Chaos-Titans rivalry alive and well