The Cochrane Generals have swept their regular season series against the Red Deer Vipers, crushing them 4-1, and got a little redemption against the Coaldale Copperheads with a 6-4 win in a rare weekend homestand.

The pressure was on to perform and continue to fend off a challenge for second in the HJHL south division by the Medicine Hat Cubs.

The Gens used their speed and close checking to hold off their opponents, despite spending more time in the sin box.

"I thought we were slumping a little bit, but we definitely came out and we proved something to Coaldale after the last game," says alternate captain Tristan Ripplinger. "I think the group is happy and it's only up from here."

Defensively, the Gens were solid, except for a hiccup late in the third against Coaldale.

"We've been working on little things, taking the forwards away on one side, and taking the D away on the other to make us a better team," says Ripplinger.

It was a breakout weekend for forward Ethan Mateice with three goals. He was selected second star Friday night and first star on Sunday.

"We went to Coaldale back in September and they kind of handed it to us (6-2), so today was a big game for us to prove we can play with a team like that," he said after Sunday's game.

"I feel like we've put a good system in place," says Mateice. "I feel like our line is clicking, and we're in the zone most of the game. You've just got to work their D and things will happen for you. That's what we did tonight."

Mateice comes to the Gens after a season with the Sicamous Eagles and played his minor hockey in Cochrane. He battled through some injuries and sickness early in the season.

"This was the first time I strung two games together and had a good weekend. It felt good."

The Gens and Vipers were tied 1-1 after one in their Nov. 25 matchup. After that it was all Gens, scoring six unanswered goals.

Patrick Forde and Dagan Kadlec each had a pair with singles going to Diago Coelho, Ethan Mateice, and Riley Hopper. Forde's linemates Tristan Ripplinger and Logan Paquette each had a pair of assists and other helpers went to Connor Stephenson, Andrew Guss, Zachariah Wilkins, and Grant Ovans.

Kashton Payne got the start between the pipes and a stingy Gens defence allowed only 16 shots.

Against the Copperheads, the teams were once again tied 1-1 at the end of the first. The Gens broke open a 3-1 lead with two goals in 10 seconds around the 16-minute mark of the second.  By 8:36 of the third, the Gens were up 5-1 before running into penalty troubles.

The Copperheads were 3 for 5 on the powerplay, two of them coming in the third, but it wasn't enough to make up lost ground.

The Forde-Ripplinger-Paquette line continues to be the top in the league, holding down three of the top four positions in the HJHL scoring race. Patrick Forde has 41 points and is also the top goal scorer with 19. Ripplinger is third with 31 points, and Paquette is right behind him with 29.

With the Cubs losing in a shoot-out to the Airdrie Thunder on Saturday, the Gens got just a wee of breathing space. But with two games in hand, the Cubs continue to be a threat, making for an interesting second half of the season.

The Okotoks Bisons have only one loss on the season at the hands of the Cochrane Generals. Unless they face an extended slump, they are shoe-ins for top spot in the HJHL regular season.

The Gens play five of their six December games on the road. Their lone game here is against the Strathmore Wheatland Kings on Dec. 16. 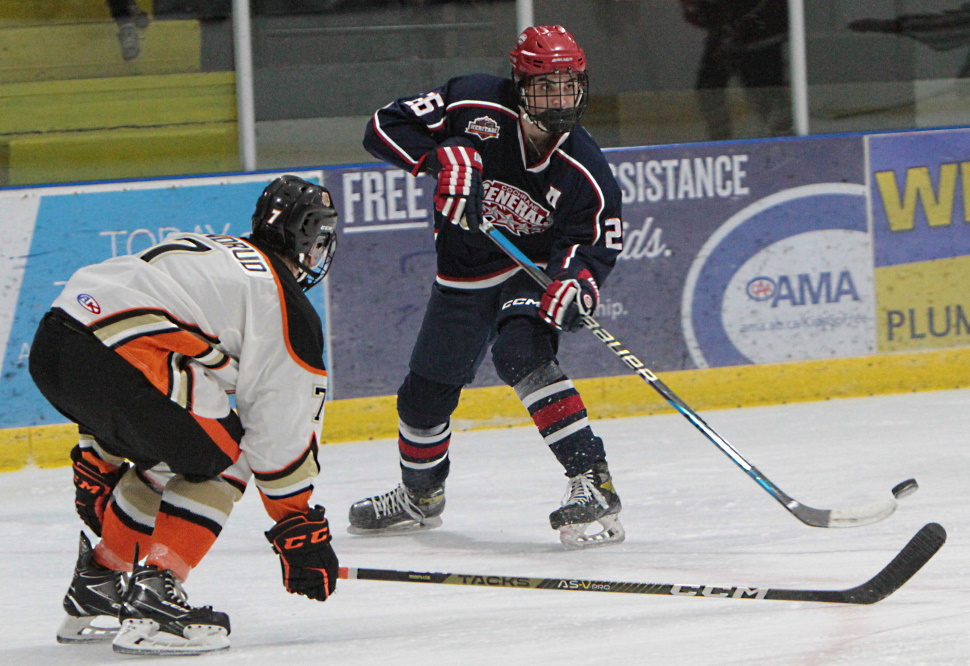 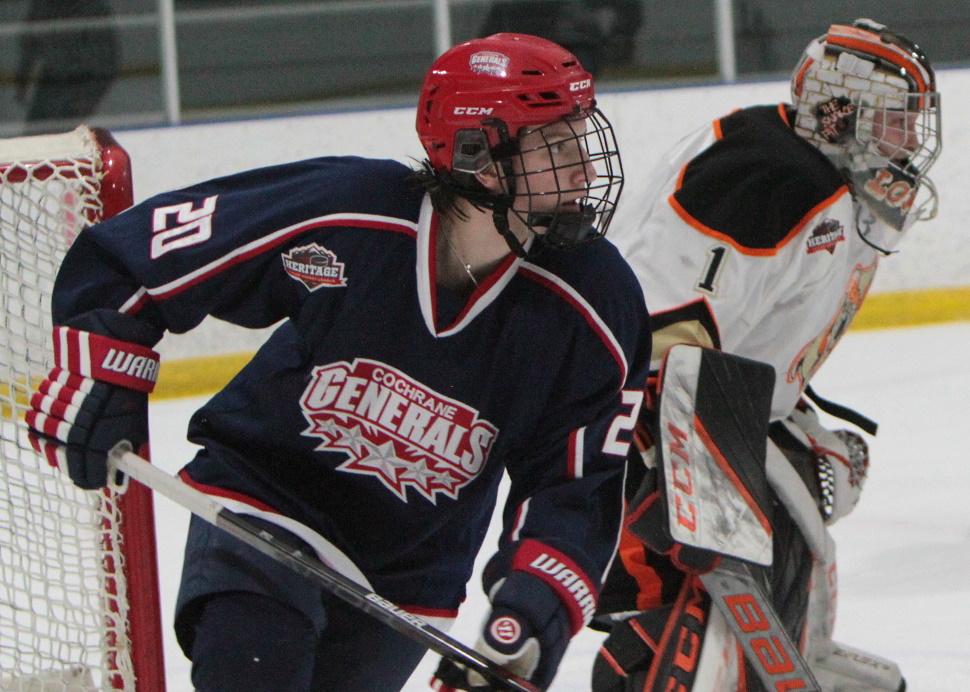 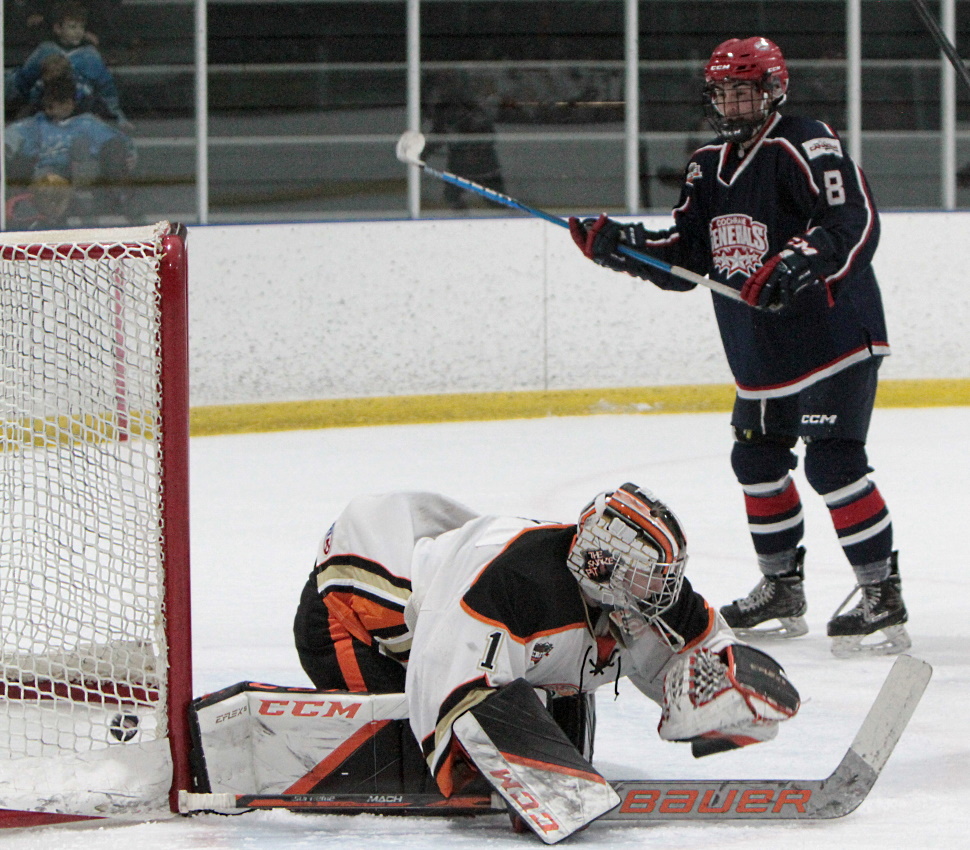 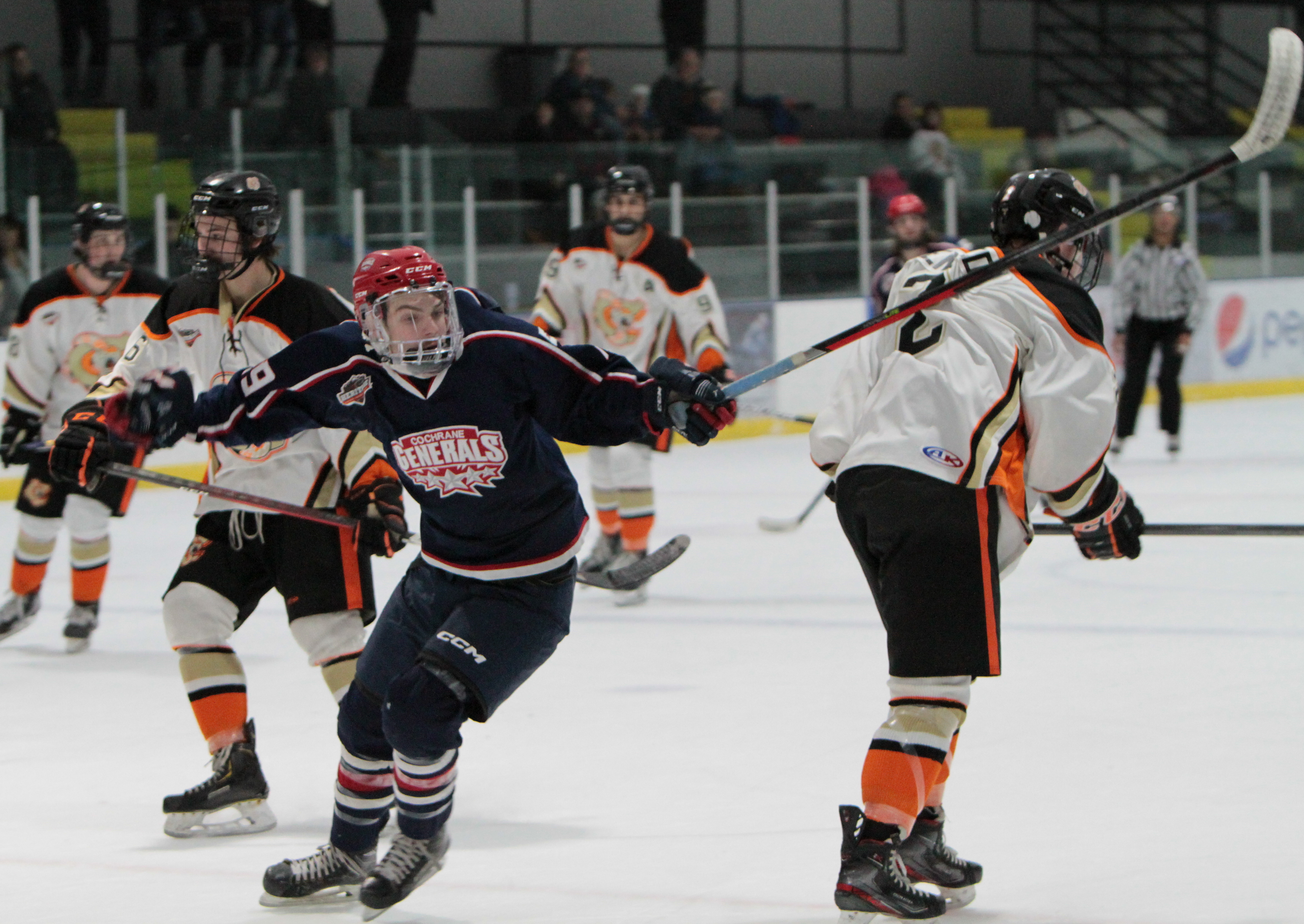 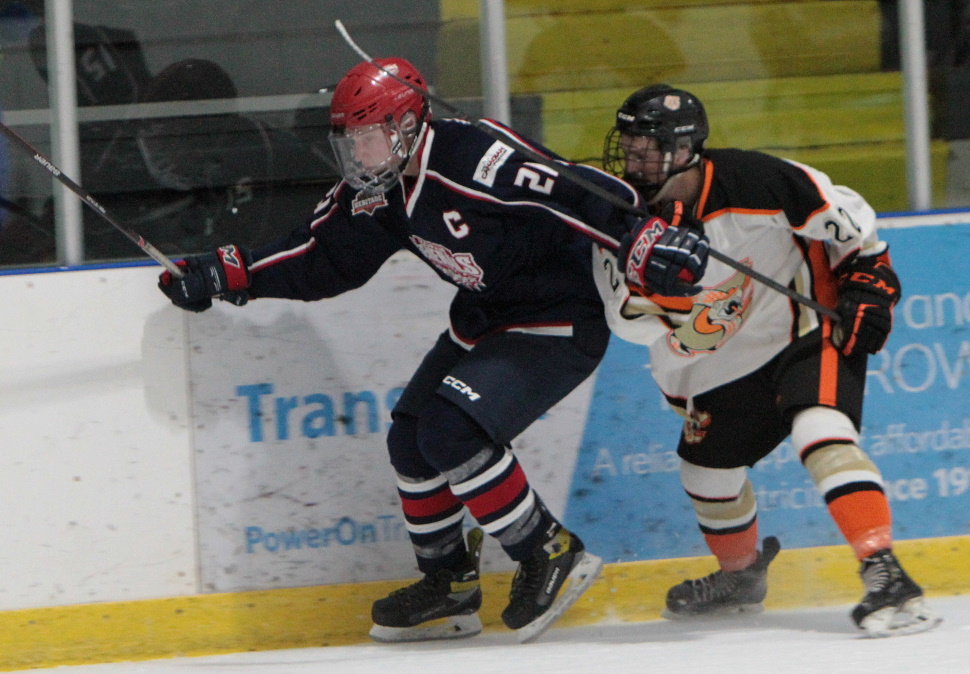 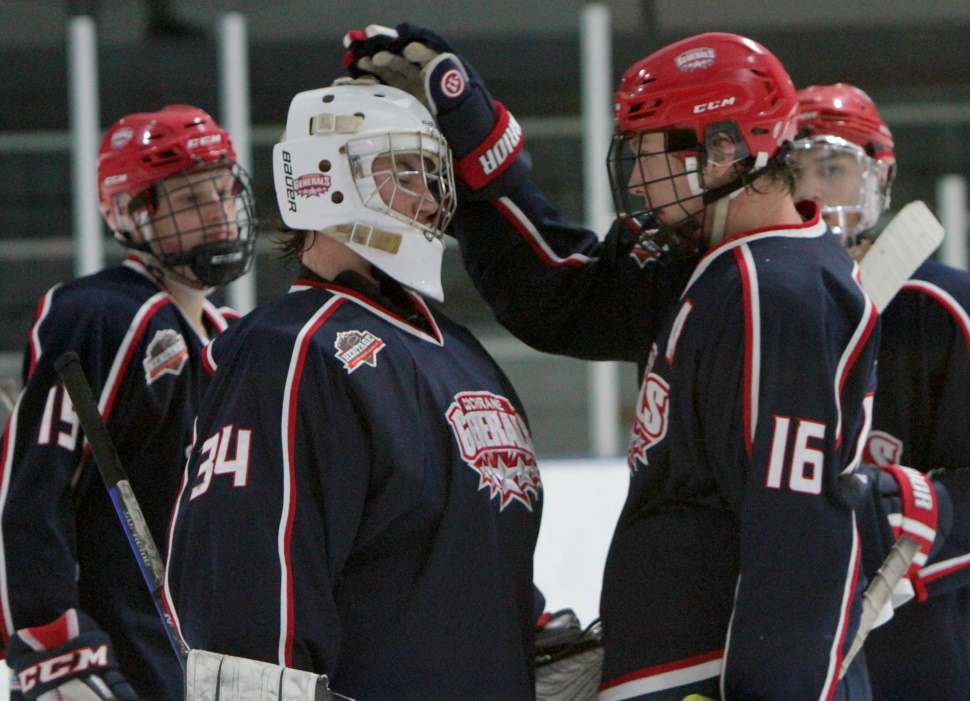 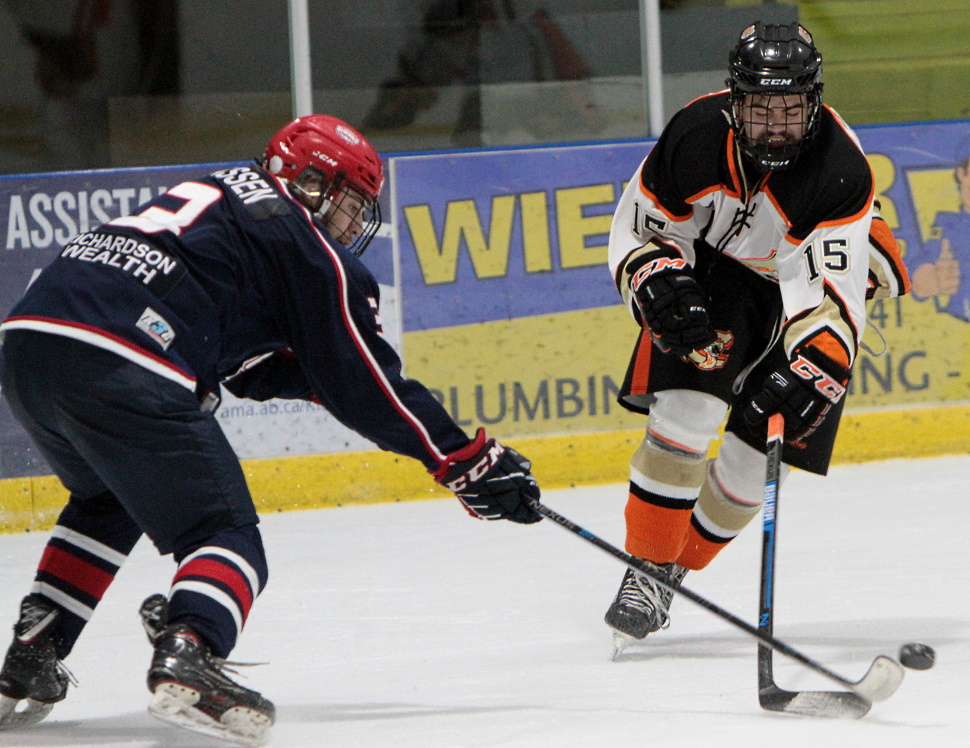