On September 23, 1982, an unwed 20-year-old Christine Garbus arrived at the Cochrane Fire Hall with a police escort.

With no ambulance readily available and time of the essence, she gave birth to her first daughter on the kitchen table of the fire hall, and set in motion a far-reaching search that cumulated with a celebration 40 years later.

Kristy Perrault, now a registered nurse at the Foothills Hospital, was given up for adoption and has now fully assembled the pieces of the puzzle of her birth. Having already connected and established a strong relationship with her biological mom in 2005, one final piece remained: who brought her into this world?

That question was answered a few weeks ago when by chance she was assigned to tend to Dr. Dennis Fundytus, now retired, at the outpatient unit of Foothills.

One day after her 40th birthday, they all came together to tell the happy story at an emotional reunion at the site of the old fire hall on 2nd Ave. W. on Sept. 24.

But it is also part of a bigger story of encouraging a more open discussion about adoption, for women to know there is help and resources available, and that it's OK for people to seek the answer to the question, was I adopted?

Yet it all may never have happened if she hadn't engraved the doctor's last name in her mind and asked the question that day.

When she did, he exclaimed, "Oh my God, you're the Cochrane Fire Hall Baby!" retells Kristi. "And it has blossomed into what we're all discussing now. It's truly been fate's way of bringing us all together, and for this to be happening the day after I turn 40, is pretty crazy."

Dennis passed along the information to Brian Winter, who was the Cochrane Fire Chief, and one of the people who helped to deliver Kristi.

Back then, Cochrane did not have an ambulance service. One would not be established until July 1983.

Because of that, Brian, also a registered paramedic, and Dennis had established an agreement to be prepared to stabilize patients at the fire hall if necessary while waiting for the ambulance to arrive.  Both carried pagers, and each had a fish tackle box loaded with medical supplies to assist. One of those tackle boxes was on display on Saturday.

"We had some good stories, some of them not so positive, but the one really positive is the one we're celebrating today," Dennis told the crowd.

For Brian, it wasn't the first time he had helped to deliver a baby but was the only time it took place on a kitchen table at a fire hall.

Bob Hawthorn, a Cochrane volunteer firefighter for 28 years and an EMT, was alone in the fire hall going over equipment when Chris arrived

"All of a sudden, the RCMP showed up with another vehicle saying we've got a bit of an imminent birth here."

When no ambulance was available, he called Brian, Brian called Dennis and a four-man delivery crew was assembled at the kitchen table of the fire hall.

"I was coaching the breathing and letting her hand grip my hands. Yeah, it was memorable," recalls Hawthorn, laughing about Chris's crushing grip.

He says it was a matter of seven minutes from start to finish.

Also at the fire hall was paramedic Roy Onslow, who has since passed.

Kristi became aware that she was adopted and after a search was quickly able to reconnect with her birth mom in 2005. Kristi, her parents, her birth mother, and her siblings have all nurtured a strong relationship ever since.

"The relationship has definitely grown into a wonderful friendship," she says. "My parents have met Christine and again the bond from a biological mom to an adopted mom is pure gratitude. For my adopted mom, I was the child she couldn't have, and because of Christine's selflessness, my parents got a family, "

"I think there will be a forever bond between myself, Christine, Dennis, and Brian. They were instrumental in making sure my mom was safe, I was safe, and without them, it could have been a very different outcome."

Back in September 1982, Christine was visiting Cochrane from Sarnia, ON to look after her niece and nephew while her sister went back to Ontario to get her furniture.

Christine and her husband made the drive from Whitecourt early Saturday morning to help share the story and meet the delivery team.

"This brings up a whole lot of that day, and I made the right decision," she says. "It was a very tough decision, it was the hardest one I've ever made, but at the time I did what was best for her."

She clearly remembers the day Kristi called to ask if she was her mom. When a 403 area code came up, she instinctively grabbed her husband's hand, almost knowing who was on the other end.

"She goes, 'I think I'm that baby'," recounts Christine. "I started crying. I thought, oh my God, it's actually true, it does come true. Then I went home, called in sick for work, and spent the rest of the night talking to her on the phone."

"There were days when she and I talked three or four times a day, and neither one of us wanted to hang up the phone."

"When I finally got a picture taken of myself, it wasn't the best picture, I sent it to her and all I could hear was, 'Oh my God, I look like somebody."

Kristi came to visit her in Ontario a few years later.

"As soon as I saw her, I had tunnel vision. Like, everybody get out of my way, she's coming through and I have to get to her. I never thought I'd get to hold her again."

She has also established a strong relationship with Kristi's parents.

"I've very grateful to them. They are amazing people who raised her to be a beautiful and caring person, and I thank them for accepting me into their lives."

She was admittedly a little nervous about the public attention of Saturday's event, yet says she has never tried to hide it from her family, friends, and co-workers. She has often retold the story of Kristi's birth.

Her family and friends were supportive of her decision but there were those who disapproved.

"Some people thought I was wrong for what I did. Some even said to me that I should never have been allowed to have more children because of what I did."

She hopes it's easier for women now but believes it does remain a struggle.

"There is help," she says. "The Cochrane community was amazing, and if other women ever find themselves in this situation, reach out to people and don't be afraid to go talk to somebody, because there are people there that will help."

Kristi has recently agreed to become an ambassador for the program of Gems for Gems called Hope's Cradle, a collaborative initiative to support mothers in need and save infants from unsafe abandonment.

She says Saturday was a happy day but it wasn't about seeking personal attention.

"I want people to really take away that there are so many things out there to help women and different resources, whether you give up your baby for adoption, or you're struggling and you need extra help."

She believes adoption should be spoken of more openly.

"Everybody has their own choices, whether you choose to tell your child or share your story or keep it private. Everyone has their own reasons for that."

But for those who have wondered if they are adopted, it's never too late to seek the answer.

"Maybe the story might not turn out the same, but it's OK to start looking and see if you can get those answers that you need. I always had those questions, Do I look like anybody? Do I have a brother or a sister? And I had many questions for my biological mom. Why did you give me up was probably the biggest question."

"Adopt is very near and dear to my heart. It's truly an amazing gift that someone goes through on both sides. It's very selfless."

Kristi and her husband Rick have been together for 21 years. Saturday, he was enjoying the positive vibe of fate and how it all played out.

"It's nice that everything for my wife, with the background that she has and the story she has to tell, came out so positively."

"It was my oldest daughter's full choice. She's an adult, she can say who she wants as her family and she chose this lovely woman. It's all fate, it's all through adoption, fate coming down from one generation to another. I love it."

He clearly remembers the excitement in his wife's voice when she shared how she'd found the doctor who brought her into the world.

"That was kind of trippy. Just hearing the excitement in my wife's voice, just adds more to the story that she never fully knew."

Fifteen years ago, the couple came to Cochrane to visit the fire hall and saw the table she was born but he says this is the icing on the cake.

Kristi's parents live in Fox Creek and are out of the country. Rick read a letter from them at the celebration.

Former volunteer firefighters Dave McAuley and Dennis Goodsell were also in attendance on Saturday, and several members of the current Cochrane Fire Service were presented. Fire services brought a 1961 Saskatoon pumper from their museum. Members of the EMS Foundation delivered a 1986 ambulance, similar to the one that brought Kristi to Calgary. 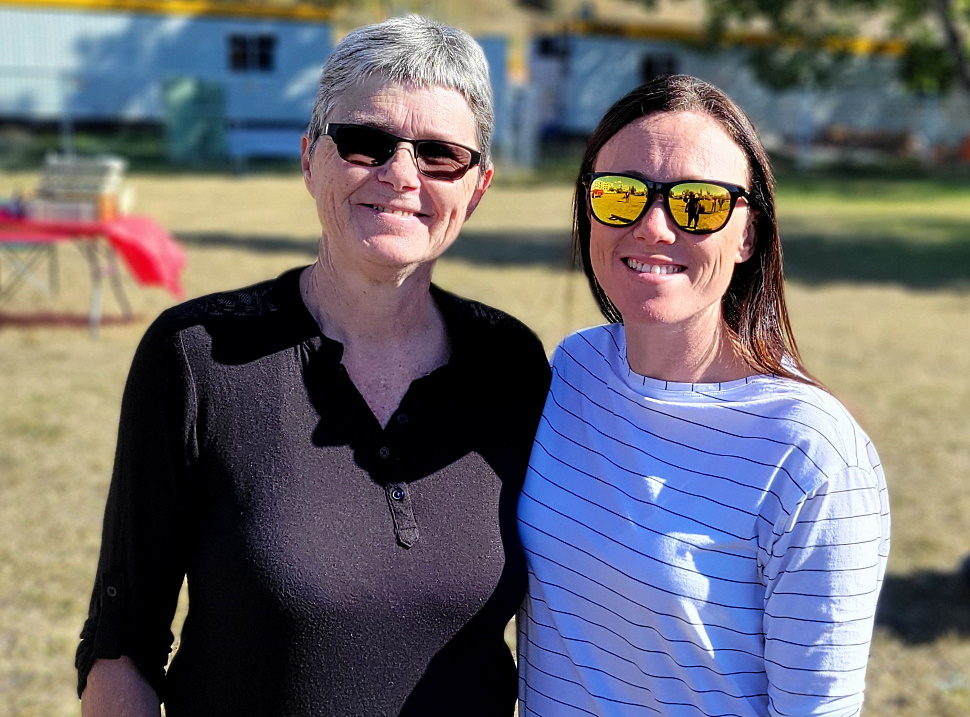 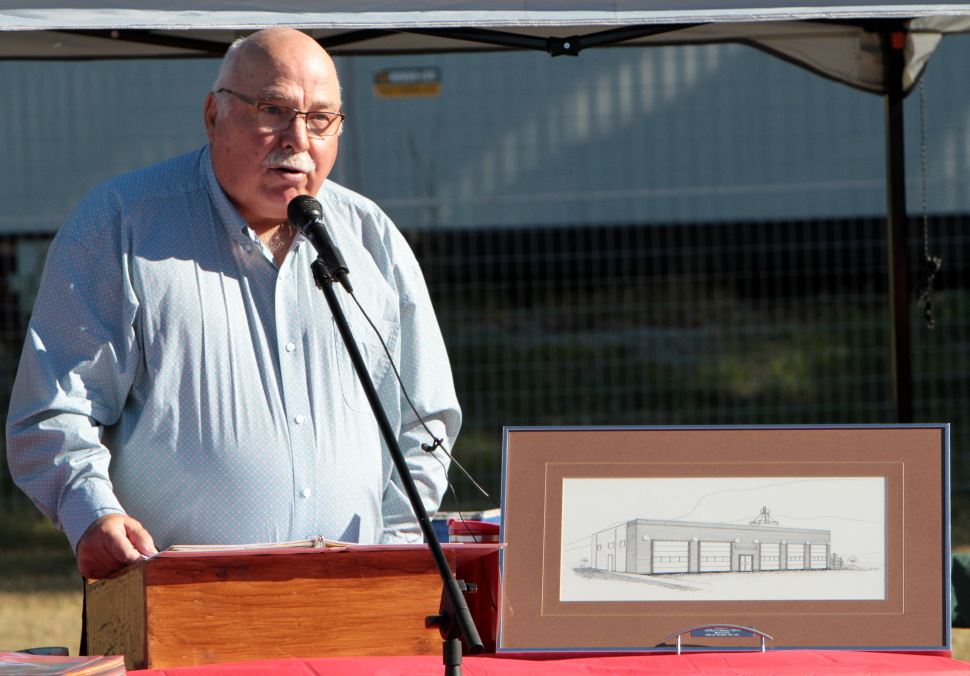 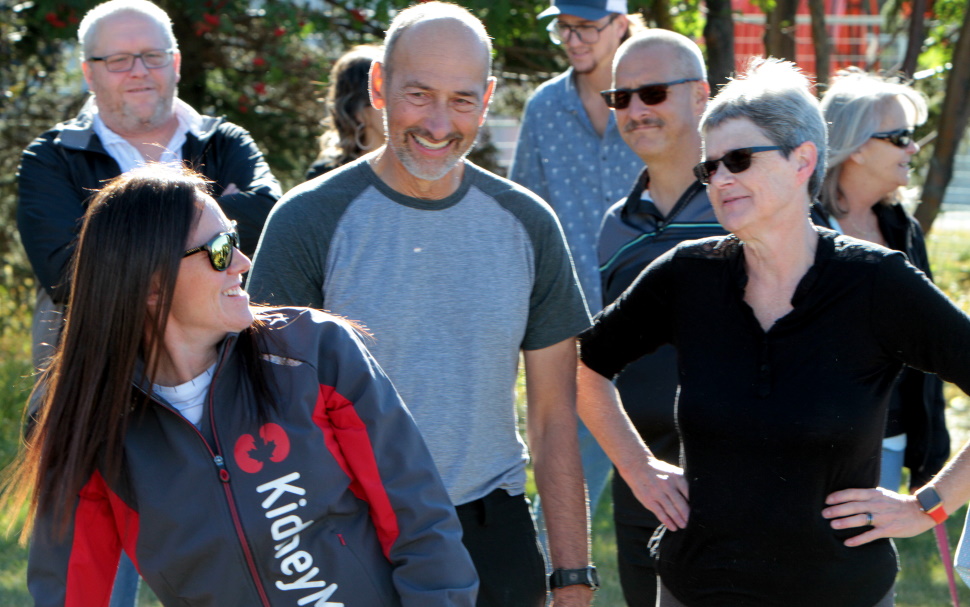 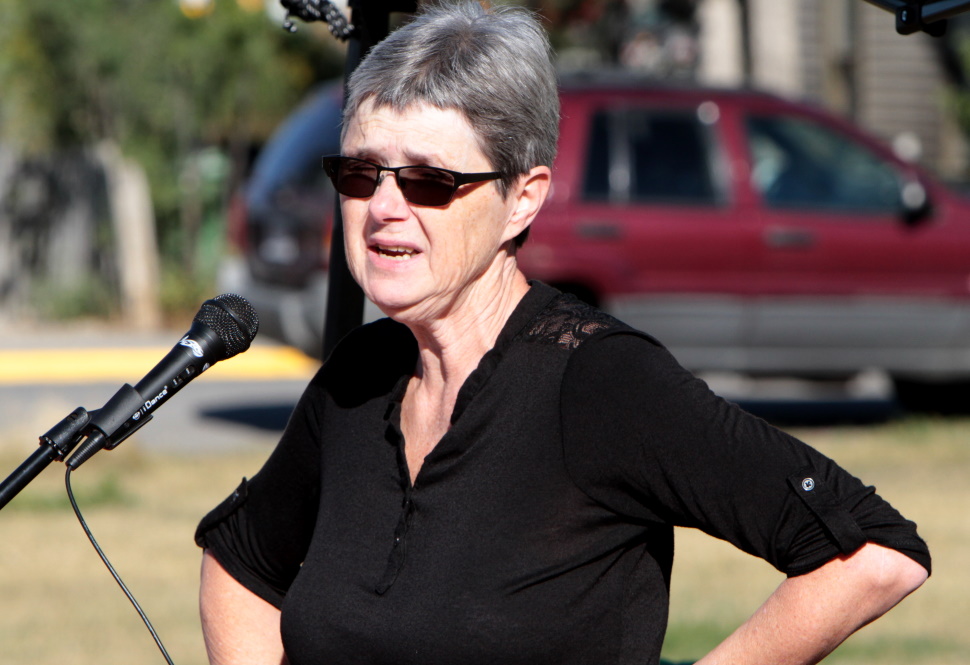 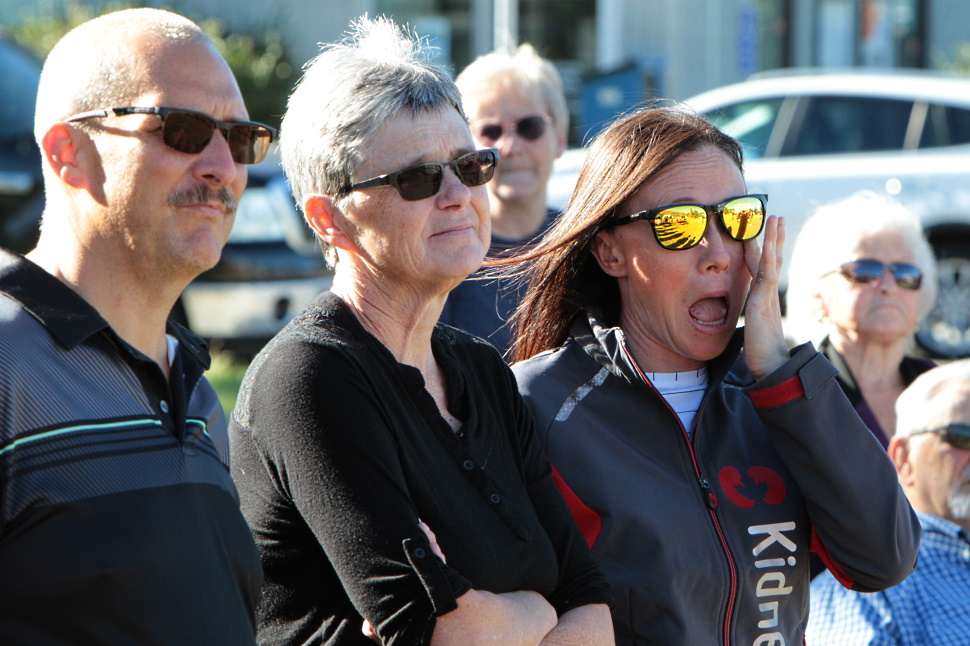 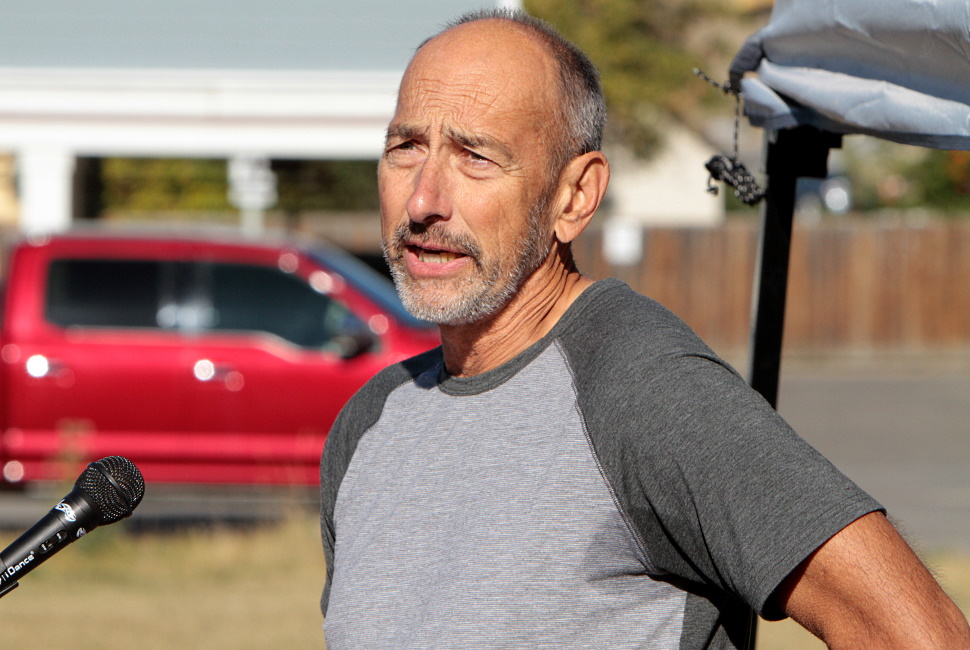 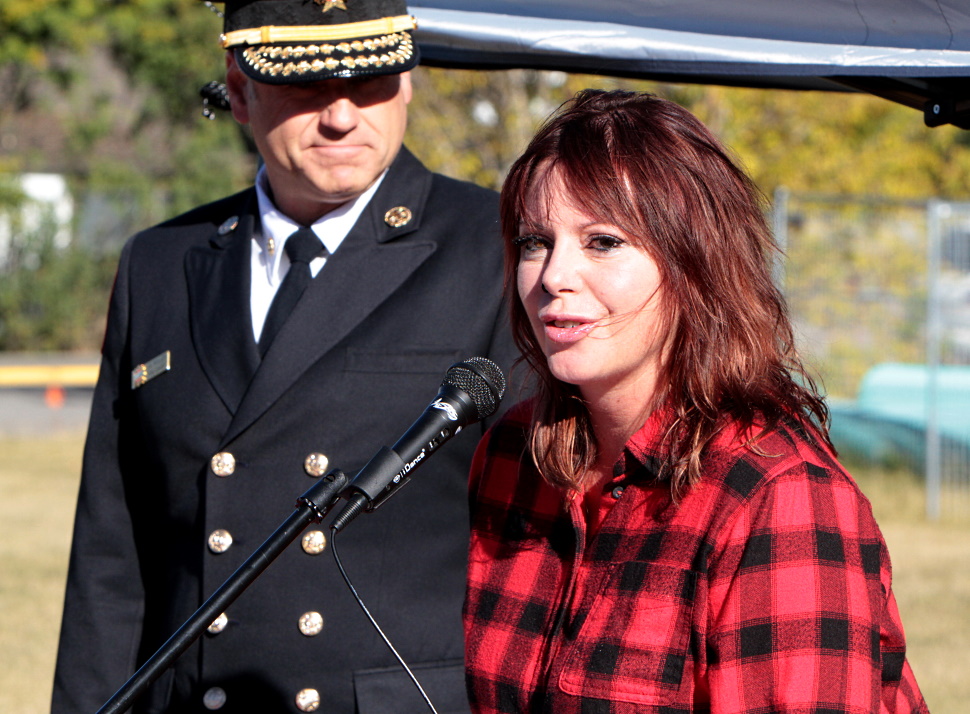 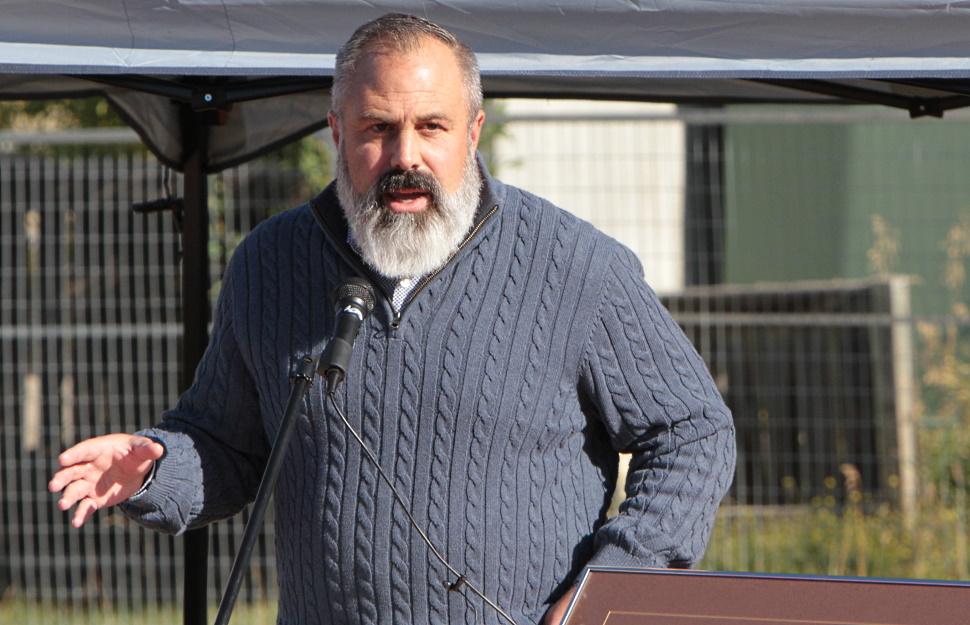 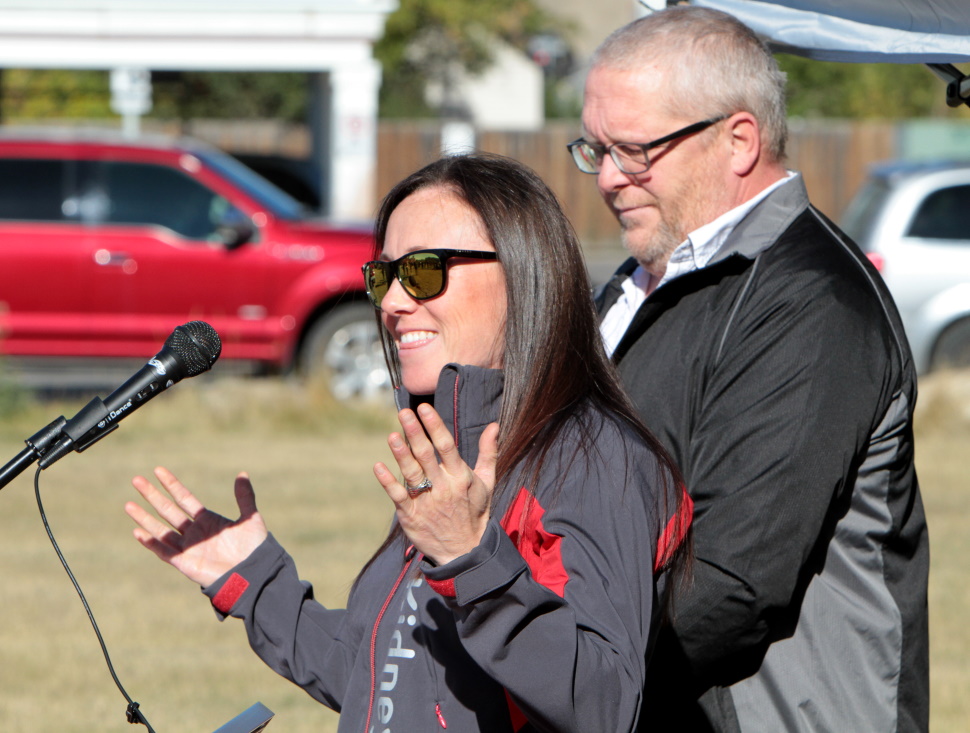 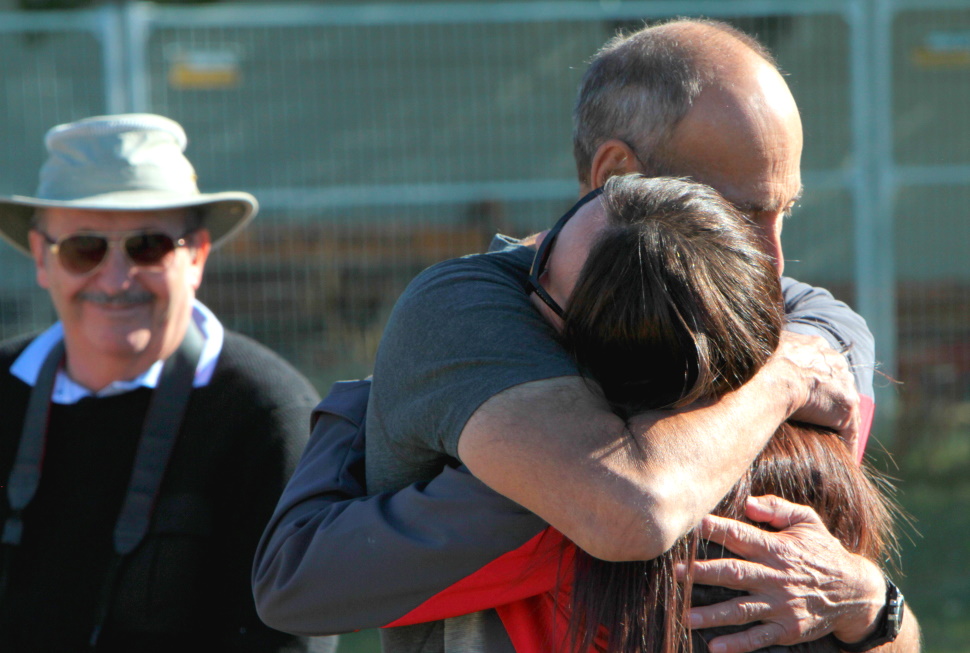 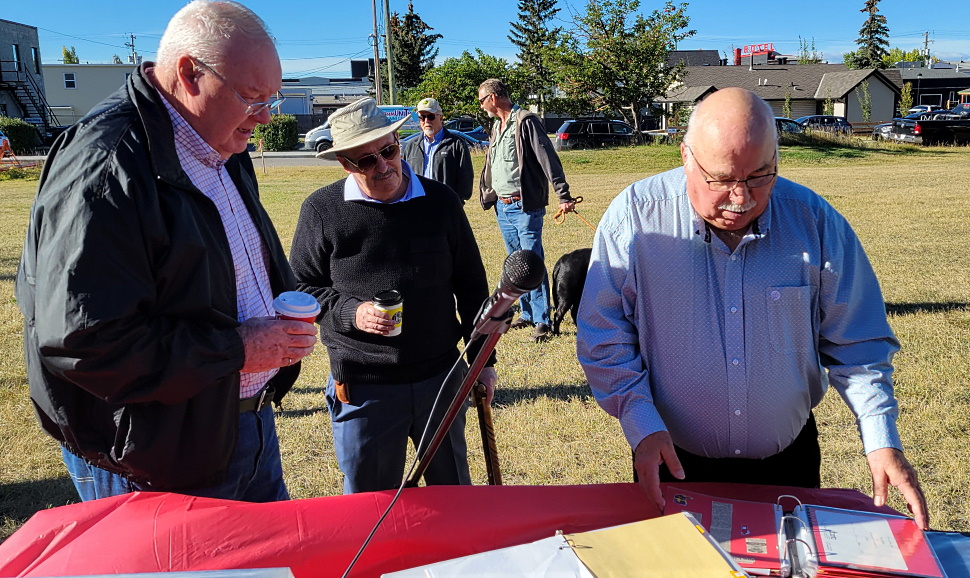 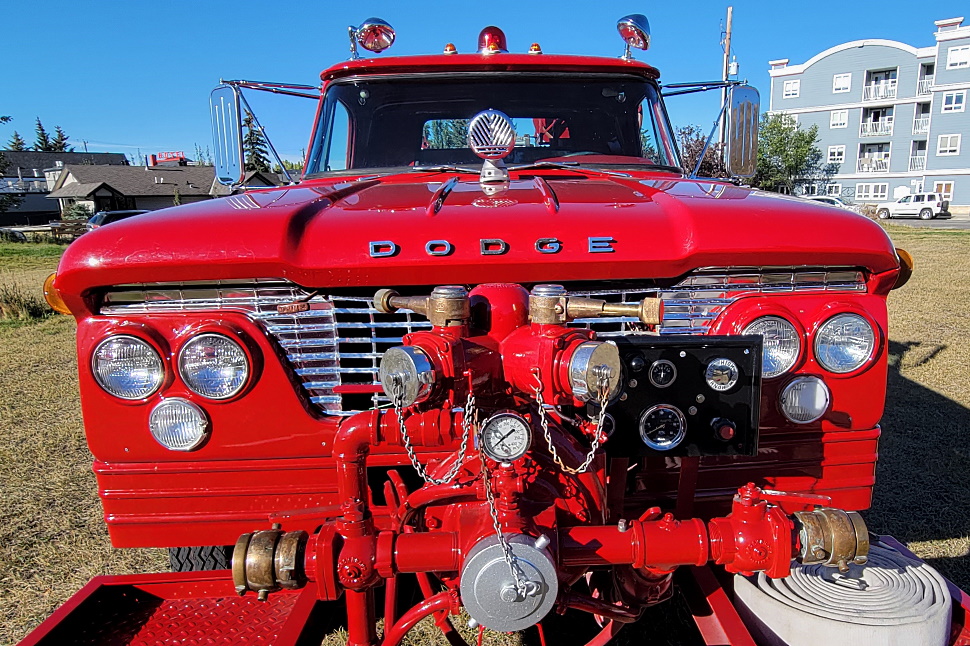 Teenagers who were previously reported missing have been found