The Alberta darts community is alive and well and recently rolled into the Cochrane Lions Event Centre for the much-loved Shoot on the Bow.

The ranked tournament featured a who's-who of Alberta's darts scene. The sport successfully combines extremely tight competition with a chance to rub elbows with other archers from around the province and create some lifelong friendships along the way.

Many have been here several times in the past, including Kathy Pasjack, Darts Alberta publicity director, of Grande Prairie.

"Alberta has a large darts community, and we're all like family," she says. "We travel almost every weekend to see everybody and I try to keep everybody that doesn't come updated on what's going on."

The Shoot on the Bow is one of 10 ranked tournaments in the province. Competing at these tournaments is important for those seeking to be among the top 16. It opens the door to advance to higher-level national and international tournaments. Some even play overseas or go on to play professionally.

The national championship was held in Toronto, ON in mid-June, and the Alberta team returned with some hardware. They won bronze behind Nova Scotia and Newfoundland, and the men's team won the treasured Nodor Cup.

"It was really good to see because they don't always win medals, there's only three," says Kathy. "You're competing against the Eastern provinces where darts are a way of life."

Making the Alberta team is no easy task either.

"We have some truly phenomenal players, and getting on to that national team is pretty tough. Almost half of the players were competing at nationals for the first time, and they represented us so well."

Shaun Narain, who won the tiebreaker to earn Alberta the Nodor Cup, is the province's number one ranked player and is sixth in the world in soft tip darts. He says coming to the Cochrane event is all about fun, and a chance to play against friends who helped him along the way.

"Everybody in this room is number one to me," he says. "These are the ones who made me who I am. Without them, I don't think I would be nearly as good as I am. These guys mean a lot to me."

This weekend, he's in Germany on a professional challenge tour, where he's currently ranked 29th. He frequently travels to Europe to compete.

Jim Edwards made his ninth appearance on Team Alberta and is proud of how the team stacked up against other provinces. This year, he says 44 competed at Alberta's provincials compared to 300 in Ontario.

"Out of that 44, we were able to pick the best eight and go there and win the bronze medal against some powerhouses."

Jim is out of Grande Prairie and enjoys coming to the Cochrane tournament.

"It's a good tournament, It's a lot smaller than some of the other tournaments, so it's a little more personal."

He has played abroad, including two appearances at the World Masters in England.

"I did well there and got to meet a couple of my heroes, got beaten by a couple of them, but it's quite an experience. England's darts are at a high level and I probably played the best I ever have there."

Logan Crooks was on Alberta's team and is one of the players who has gone overseas to England to pursue the dream. He played professionally there for just over a year before returning to Calgary. Now he enjoys competing on weekends.

Darts has been a lifelong passion, and he's been to the nationals many times as a youth and adult. Logan seldom misses the Shoot on the Bow and had won it three times coming into the weekend. He won again in men's doubles.

Crooks inherited his enjoyment of the sport from his parents and started playing at age 7.

"My whole family plays, too. You know, aunts, uncles, grandma, grandpa, so it was a family thing."

Brenda Moreau is the number one ranked female player in Alberta and shares third in Canada. It was her first time at the Shoot on the Bow.

Brenda moved to Edmonton in October 2020 from the Northwest Territories.

"It was great coming down here because in the north I played on a small island, and there are only three dart players. Now I play three times a week, so I'm pretty busy."

Still, her remote location didn't prevent her from taking the long and expensive trips necessary to compete and remain a top-ranked player.

She was impressed with how Team Alberta supported each other in Toronto.

"Being on Team Alberta this year was new for me. There are a lot of elite players and it was really good to have so many players that work so well together. They meshed well, they complimented each other very well; it was a beautiful thing."

Calgarian Crystal Chaisson started playing at a young age and she's made Team Alberta for almost 20 years. She plays in tournaments most weekends.

"You see all your old friends, and then you meet so many new people and create new friendships. It's awesome."

Just 16, Nathan Osmond is already established on Canadian dart scene and has appeared on the world stage.

When he was 13, he made the provincial team for the first time and went on to represent Canada in the Youth Darts World Cup.

"I didn't do too well, but I had a good time, good memories, and it was a valuable experience."

He followed in his brother Riley's footsteps, who qualified for the world tournament held in Japan a few years earlier.

Pat McAlinden, of Brtican Darts Supplies, set up a small shop at the tournament. He discovered the sport at age 30, has loved it ever since, and currently plays in three leagues.

He took his passion one step further after being laid off from the oil patch and established a darts store. He travels to all the ranked tournaments, bringing along just a sampling of what's available in his 1,200 sq. ft. store in Calgary.

From that sampling, a player could choose from a large selection of flights and shafts.

"It's your instruments for the game, so you can personalize them to whatever colour you like. I've got them in every shape and size."

To help grow the sport, Darts Alberta has a grassroots program that pairs top-ranked players with new ones to help familiarize them with competitive play.

"It's definitely a good way to grow the sport," says Kathy. "There's good comradery and you create many friendships along the way."

Shoot on the Bow tournament director Ellison Smith, who is also president of the Cochrane Mixed Darts League, says the July 8 to 10 event was a success. About 120 people participated, including the highest number of mixed doubles teams yet.

"We've had nothing but good responses from everyone," he says. "It was an excellent weekend. We never had any problems or real complaints, that's the main thing."

Smith says they're looking at holding the shoot in August next year. 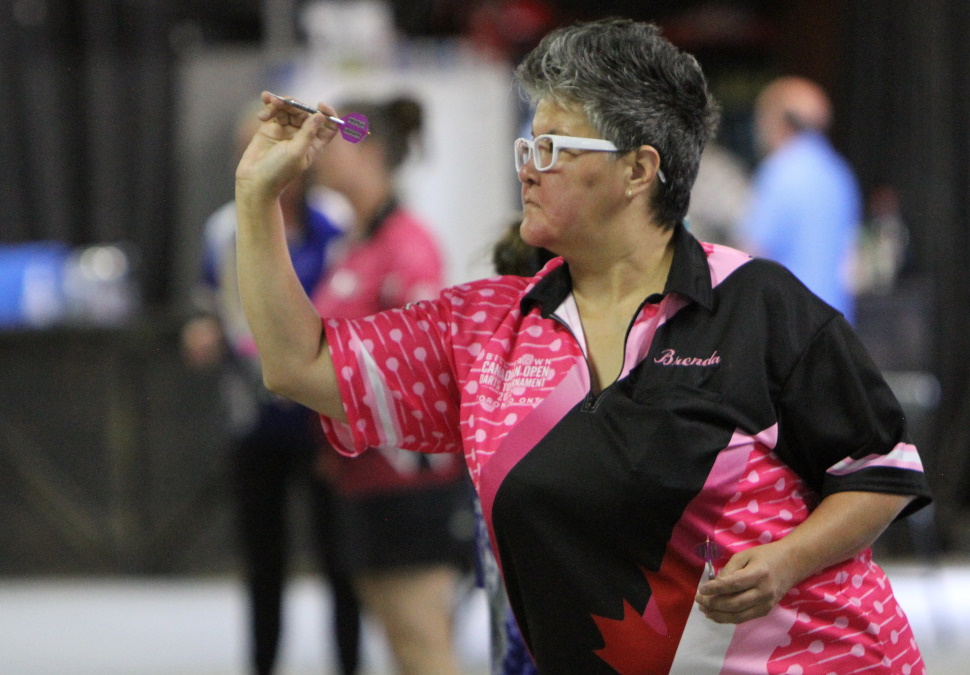 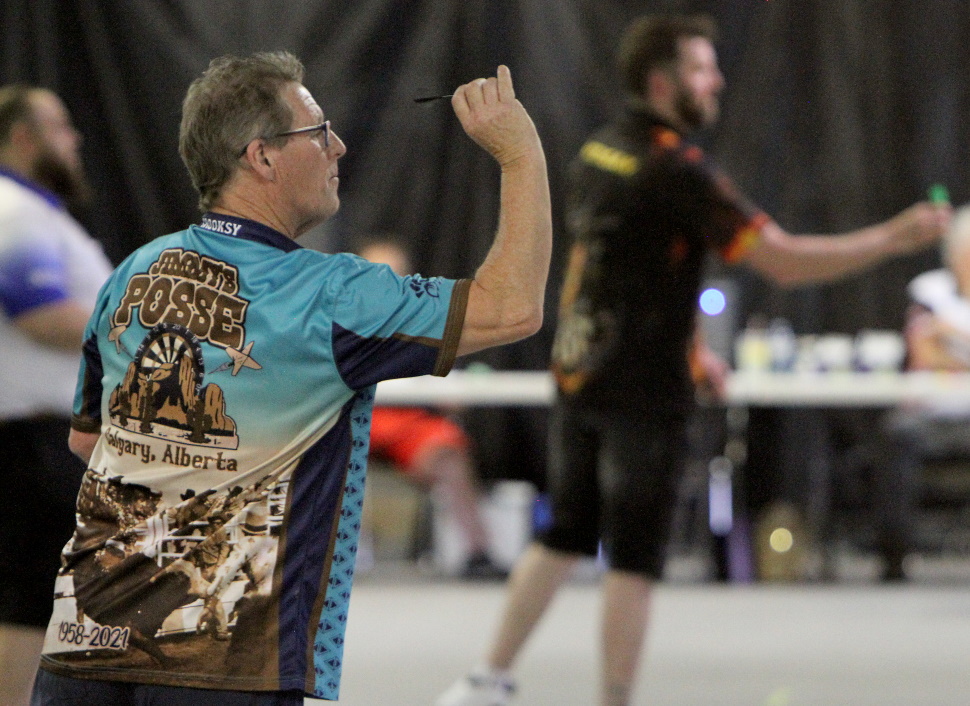 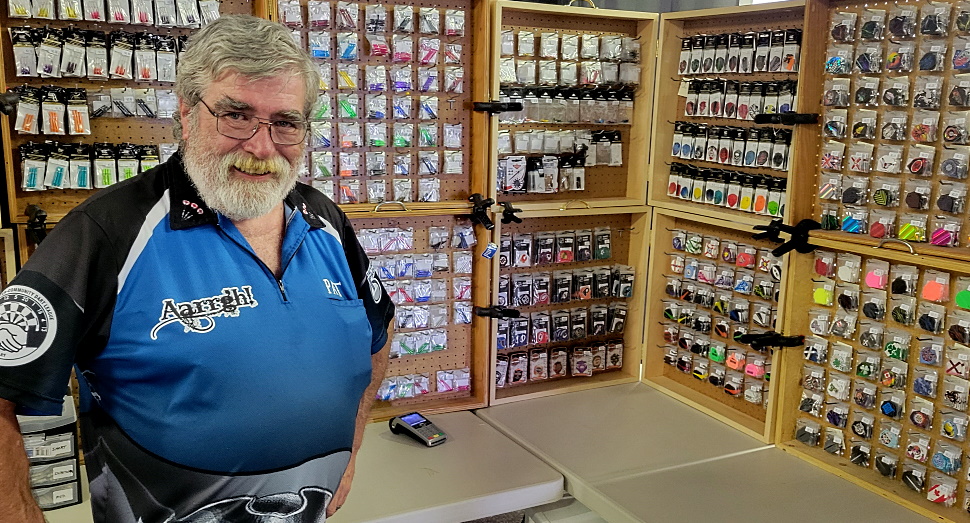 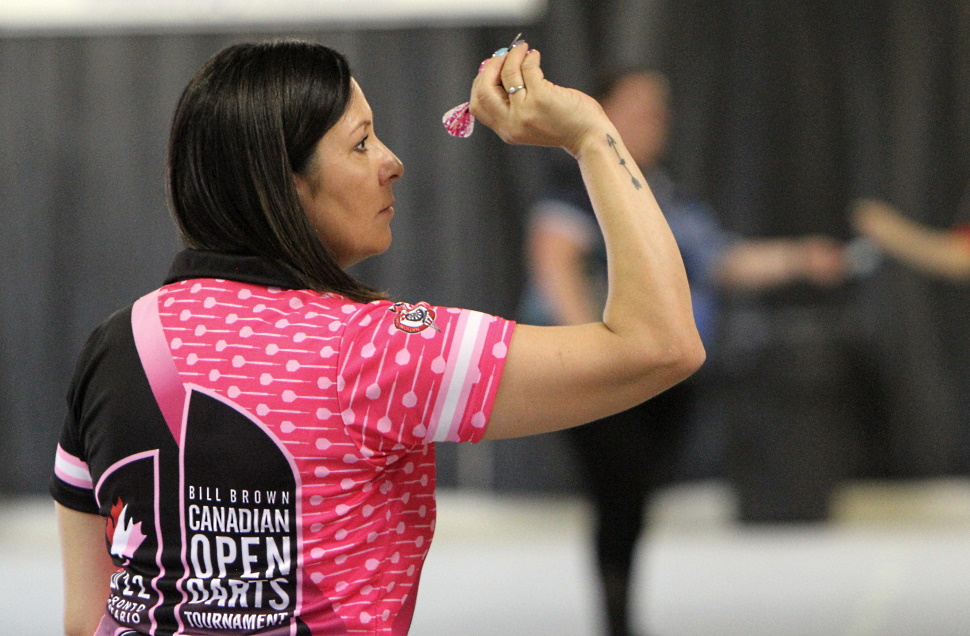 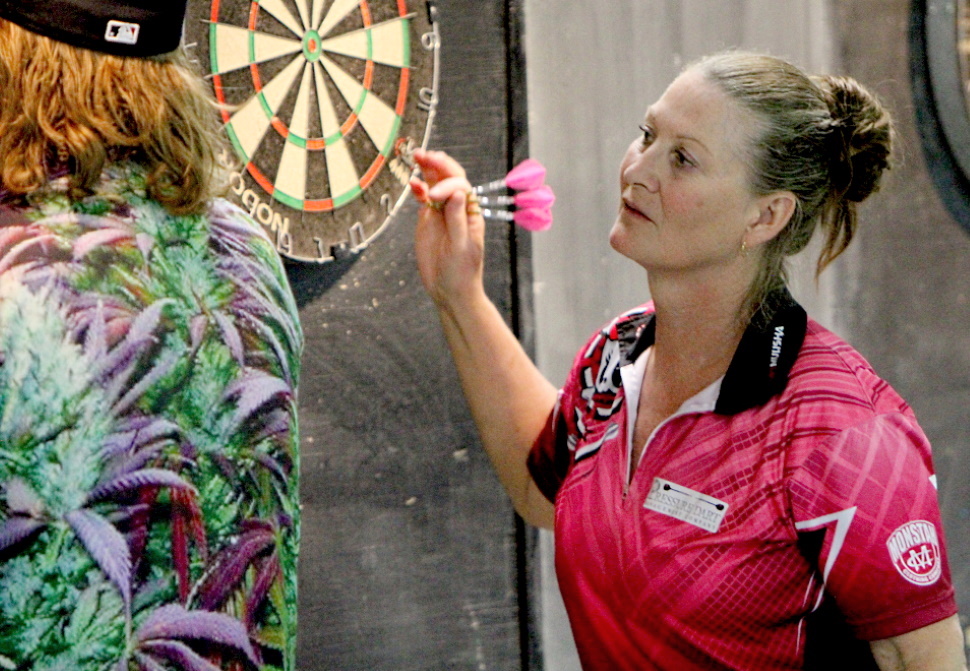 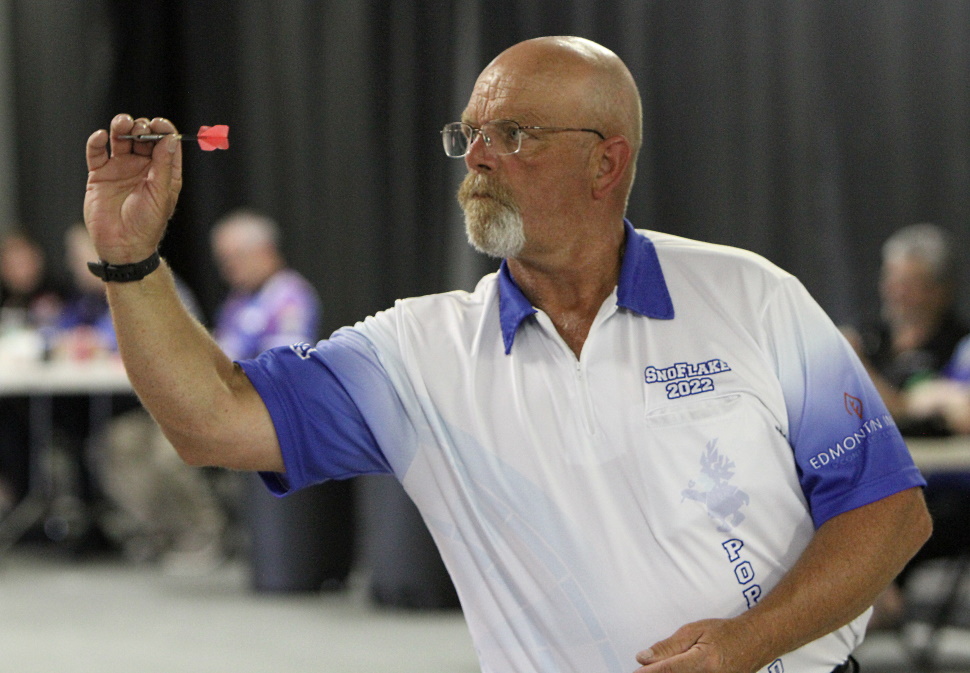 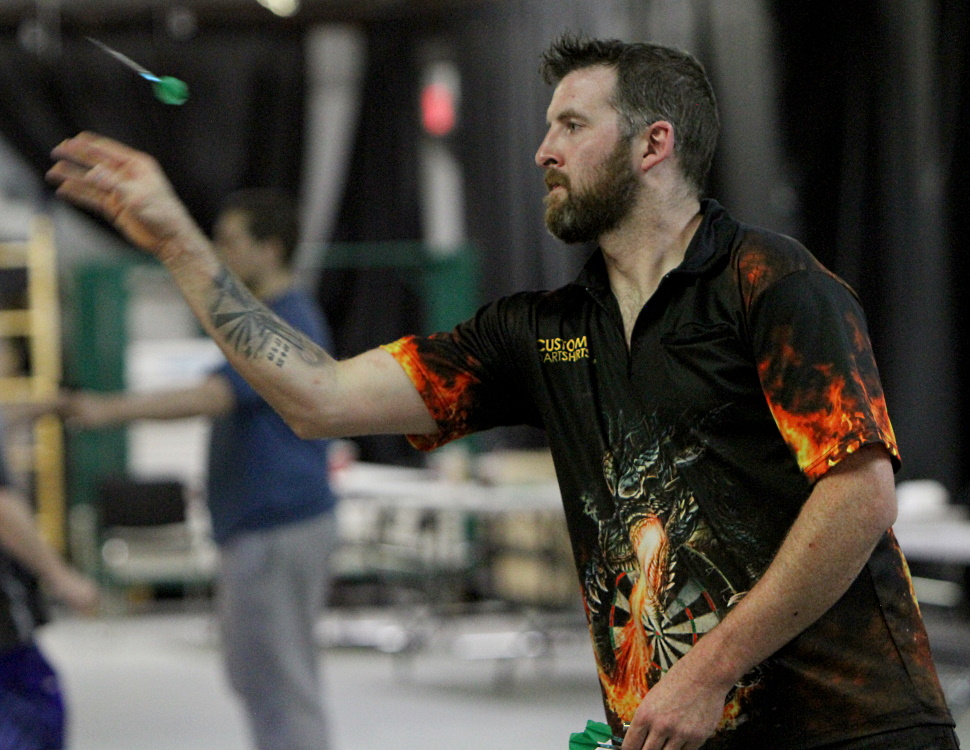 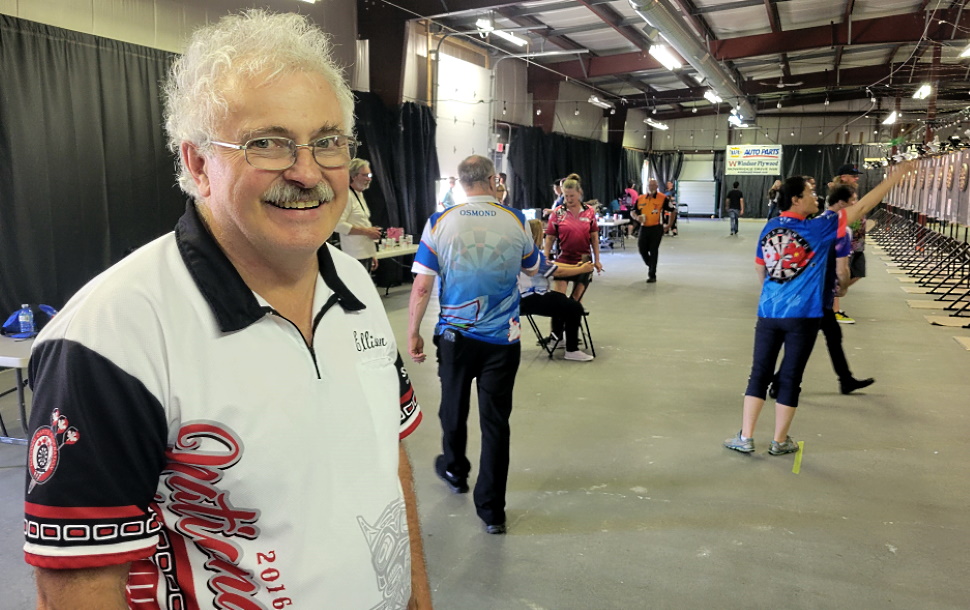 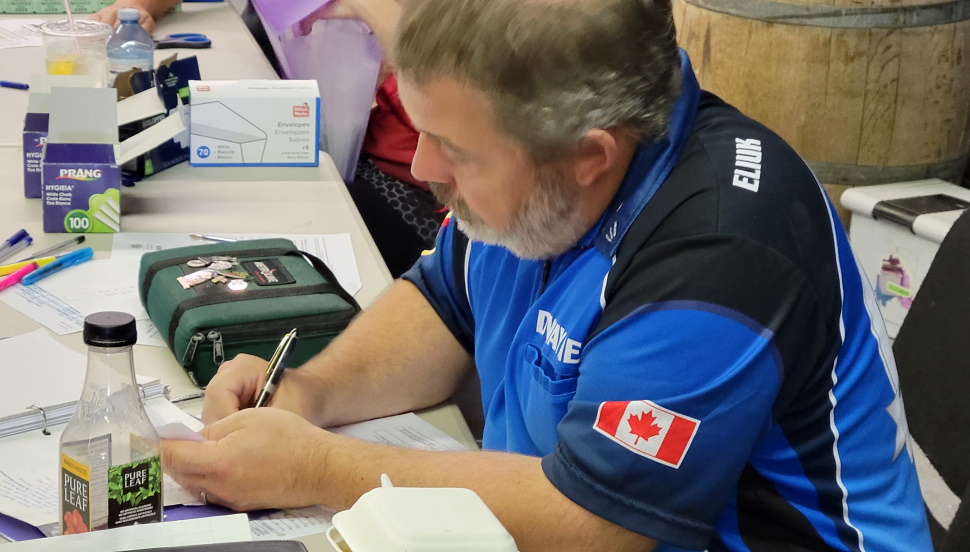