MLA Peter Guthrie believes the two obstacles that stand in the way of completing the design of the new Hwy. 1A-22 interchange will be cleared up sometime this fall, and he believes the project will go to tender in 2021.

Guthrie toured the archaeological dig northwest of the intersection on the Cochrane Ranche last Friday, where a team lead by senior project archaeologist Sean Pickering is completing the third leg of the dig.

"This is the final dig," says Guthrie. "They will be done before the snow flies."

Also, negotiations on the pipeline right-of-way are underway. A series of pipelines cross Hwy. 1A near the interchange. Engineering evaluations are underway, and agreements need to be signed with the energy companies involved.

"I'm not sure of the completion time," says Guthrie. "I think that will take a little bit longer than the archaeological dig. Once they have that evaluated, then they can get the final costing down, submit the project for final design completion, and then go out to tender."

"I'm hoping we are going out to tender sometime in 2021 and start later that year."

"I think that's a reasonable time frame, and they're prepared to start winter construction, as well."

When it does get underway, Guthrie has confirmed with Transportation officials that Hwy. 1A will be four-lane to at least the main entrances to Heritage Hills and Heartland neighborhoods.

The design has also been extended north on Hwy. 22 to include work necessary to add a second turning lane from Sunset Boulevard to Hwy. 22 southbound. Adding this piece will allow for a second exit from the Sunset neighbourhood on to Hwy. 22 near its northern border.

Exactly when the widening of Hwy. 1A from Hwy. 1X to Ghost Lake will begin hinges upon the federal government.

"The agreement is in place with Stoney Nakoda and it's been signed off by all parties here in Alberta. The federal government needs to give their approval before it can begin.

Guthrie says the timing of that project doesn't impact the interchange timelines.

He believes when residents see the archeologists at the site, it reassures them the anxiously-awaited interchange improvement is moving along.

"It's exciting to have something out there that's tangible to see, that there is movement. When you're told it's in the design stage, it's hard to measure. Seeing them finishing that archaeological dig, and getting that cleaned up this year shows the project is moving along."

While anxious for shovels to hit the ground on the project, Guthrie is impressed with the enthusiasm and passion of the team completing the dig.

"It's an interesting part of Cochrane history they are uncovering."

"They're very enthusiastic and passionate about the work they are doing. It might be a slow and meticulous kind of work, but it's exciting."

The team is currently uncovering what appears to be the foundation of a 1900s bunkhouse associated with the brick plant there. This plant employed approximately 100-150 people and produced 100,000 bricks per month (Before World War I, Cochrane was home to a stone quarry and four brick plants).

A brick floor is being uncovered at a smaller site nearby. 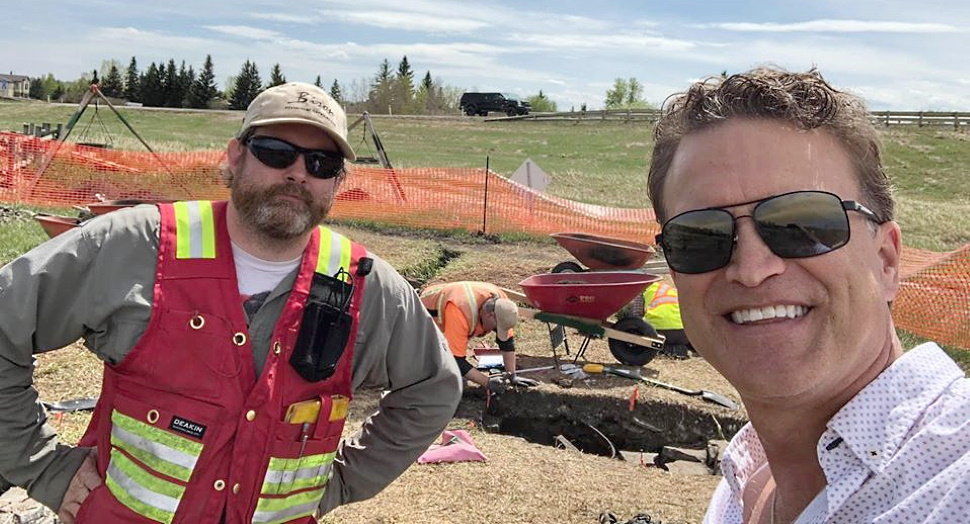