Momentum continues to build for the opening of the Wayfinders Wellness Centre, located on the historic WineGlass Ranch just southwest of Cochrane.

A ribbon-cutting celebration on Sept. 26 included a number of guest speakers as well as a tribute to the Eklund and Wearmouth family.

The centre will offer an innovative approach to supporting first responders, military members and their families recovering from trauma, operational stress injuries, and post-traumatic stress disorder.

Founder Paul Wagman says the project has continued to gain ground since a two-day "Alone Together" awareness and fundraiser held in May.

"We gained some momentum, and got a little bit of our footwork in place, but we've since revamped and reorganized into the Wayfinders Retreat, which is really growing community quite well."

He says the grassroots community support has been overwhelming, and they hope to keep that going.

While the building wasn't opened for a general tour during the celebration, renovations are well underway. It's been re-roofed, is ready to paint, a floor plan has been completed and they may be adding a deck shortly. How soon they open their doors depends upon ongoing community support, says Wagman.

"We need a little bit of seed money to get on our legs. We need community support for administrative help and volunteer help, and to grow our community because we all look forward to raising the awareness of mental health, lowering the stigma when it comes to accessing services, and letting people know there's help out there for them."

"The need is very much there, it just depends on how quickly the community gets behind supporting first responders, military and their mental wellness."

Guest speakers included Olympian Christina Smith who spoke publicly for the first time about her own challenges of overcoming brain trauma from injuries sustained while representing our nation in bobsledding.

It was challenging to speak publically, but as a pioneer in women's bobsledding, she knows fear can't be an obstacle.

"It actually made me afraid, which made me say to myself, 'You need to do this."

Her injury took a long time to be identified and it wasn't until 2013 that she started treatment. Tragedy struck that same year when former bobsleigh teammate Adam Wood committed suicide. He also had been going through mental health struggles.

"I thought to myself, if I had only had shared what I had been going through, you know, maybe he wouldn't have been in the situation he was in and taken his life," says Smith. "That really started the thought process of having to muster up courage and share more and really reveal things that were not right inside of me, because you never know who else you may happen to meet that may have similar or worse things going on their brain and in their life."

She praises the generosity of the Eklund and Wearmouth family for making it possible to establish a safe place.

"The generosity of the WineGlass Ranch for having this as the hub for the Wayfinders to me is just amazing."

"Knowing that there's a community is super important for people because that creates a safe space to open up, because they know there are people there who can relate to you who have been in similar shoes, or are open to listening."

"When you're going through this, it's not that you don't want to be fixed, but you have to get through the first step, and it's finding somebody who's going to listen."

Cochranites Dan Kroffat is better known as a former wrestler and, in his retirement, a supporter of humanitarian causes. From another chapter in his life, he spoke of the day he was taken prisoner and shot by an inmate while working as a correctional officer. He spoke of what went through his head after being shot and how he struggled to overcome the trauma.

Singer-songwriter Brittany Lockett performed her original composition "The Silver Lining" that has struck a chord with the Wayfinders since she first performed it during their Alone Together event.

In writing the song, she knew it had a special message of hope, and was eager to share it.

"I ended up singing that song to them, and the men had tears and they really connected with it. I was crying, too, because I was so honoured that they were connecting with this song as well because I knew that it had a higher purpose. I was just glad it came to fusion in this special way, bringing hope to people in this really special way "

Travis and Kara Eklund are the 5th generation of a proud ranching family that has operated the WineGlass ranch for over 130 years. Their children are the sixth.

It's their generosity that has laid the foundation for the Wayfinders, something that isn't lost on the organization. The Eklund and Wearmouth family were saluted.

Eklund says his family has a deep respect for the military and first responders. Their family even raised horses on the ranch for use in the First World War.

"I have lots of friends who are police, firemen... my uncle was in the RCMP for quite a few years," says Eklund.

"They're there for all of us in our time of need. Right now, it's coming out that they have a need in terms of health wellness, mental health services, so I feel it's our duty, responsibility and pleasure to be able to help them in their time of need; to return the kindness."

You can get in touch with Wayfinders by visiting here. 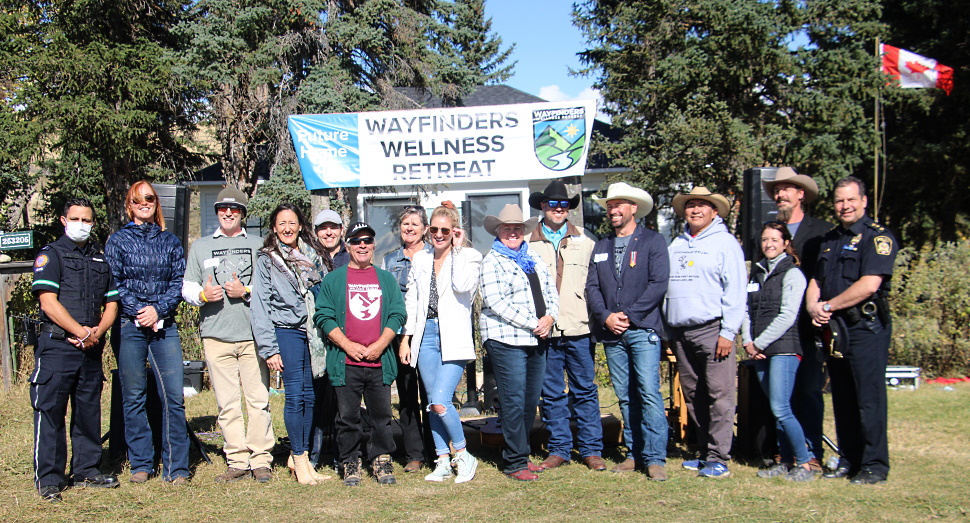 Group shot of several of the people involved with the afternoon event. 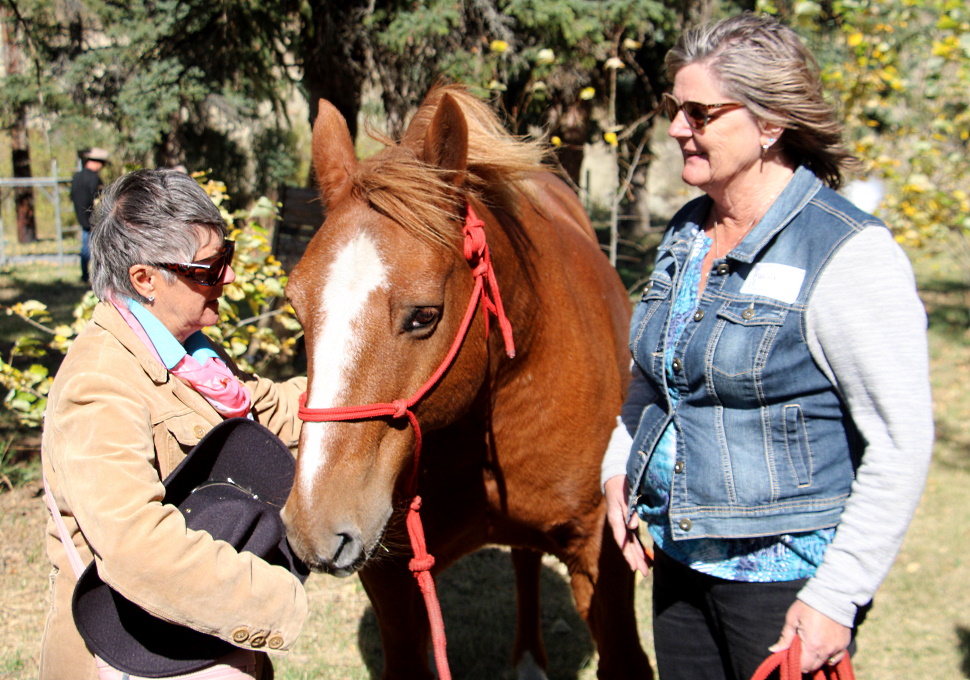 Equine therapy was on display. 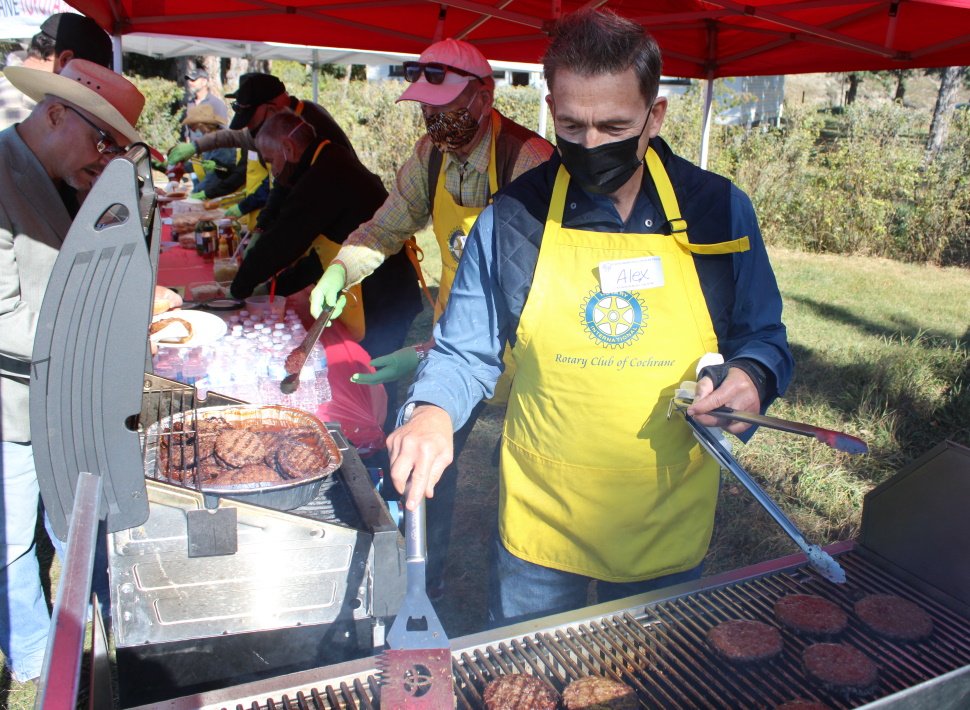 Alex Baum mans the grill at the barbecue sponsored by Cochrane Toyota and the Cochrane Rotary Club. 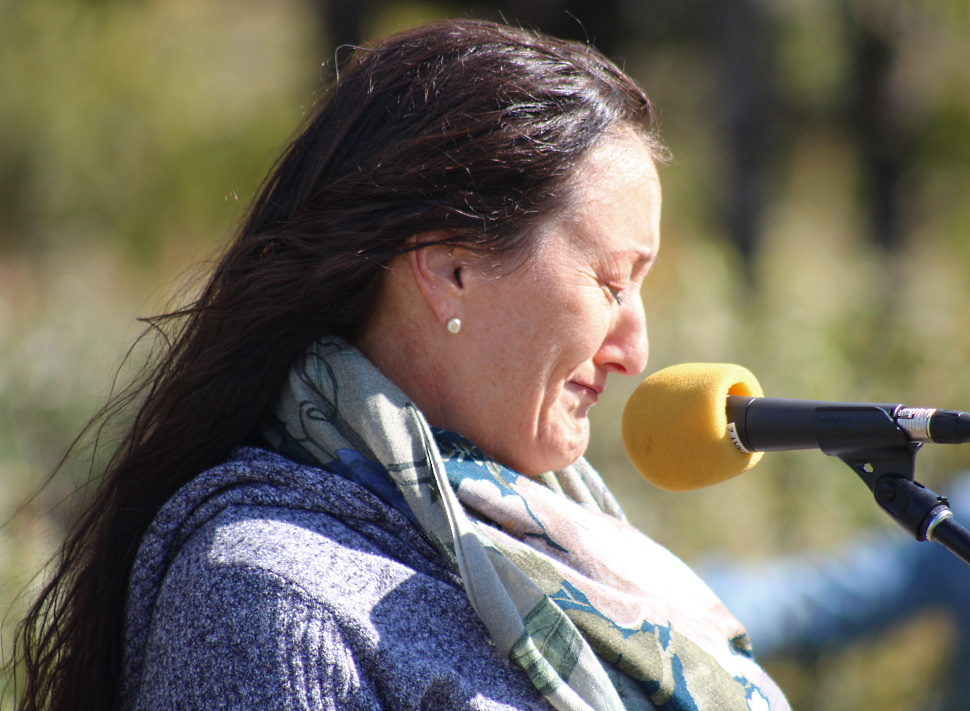 Olympian Christina Smith fights back the tears as she speaks publically for the first time on her own experiences overcoming trauma to help provide awareness for the centre. 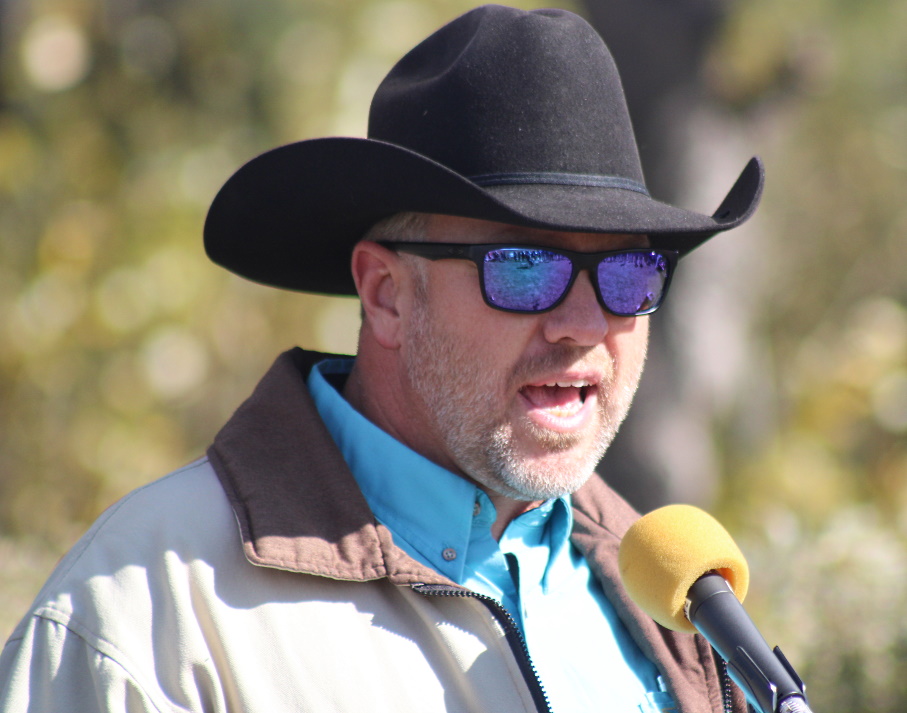 Travis Eklund spoke briefly of why they agreed to donate use of a home of the historic Wineglass Ranch for the wellness centre. 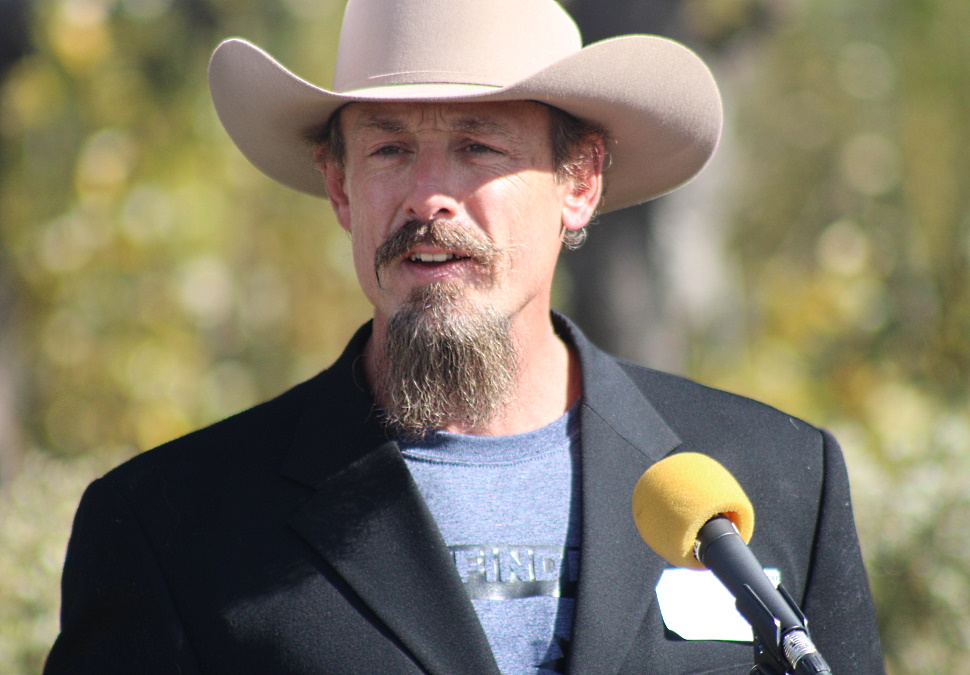 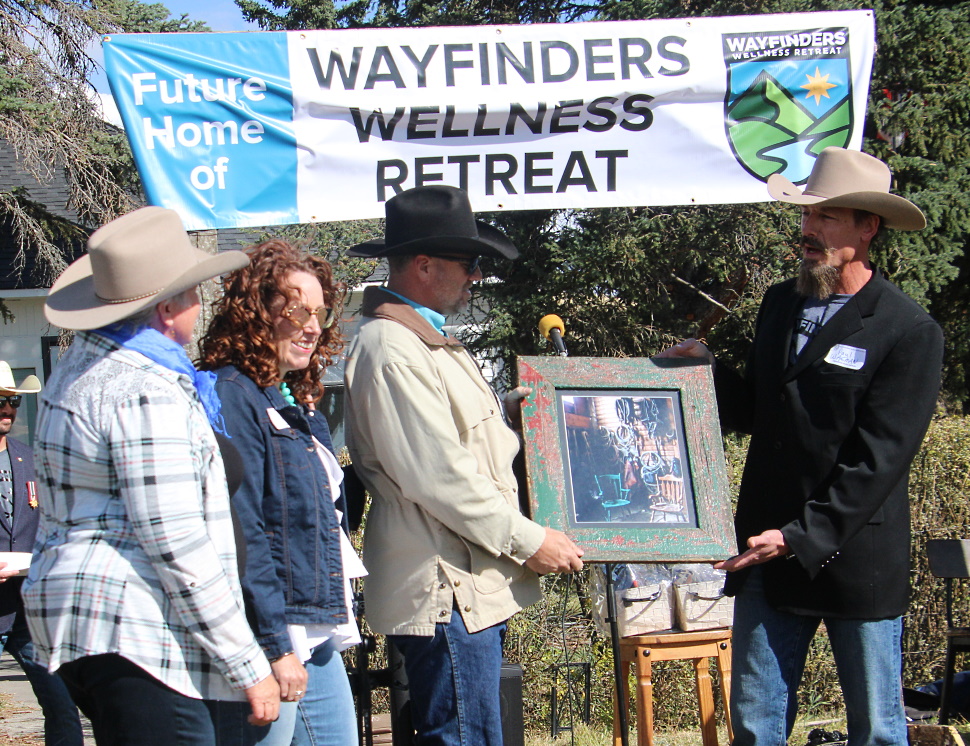 Paul Wagman, right, presented the Eklund and Wearmouth family with a heartfelt gift, thanking them for their generous support. 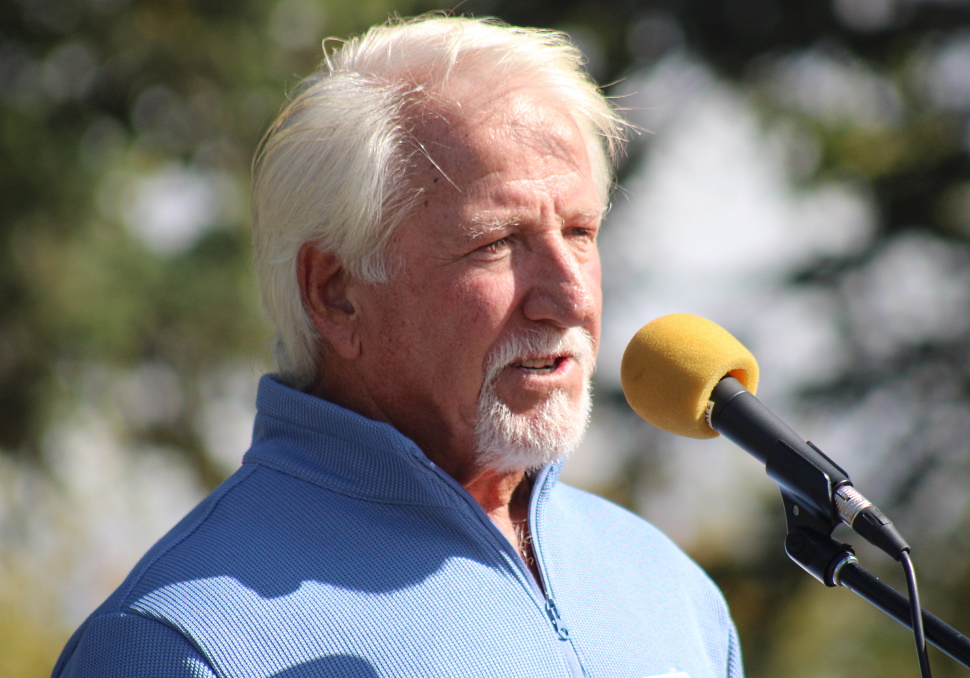 Dan Kroffat spoke on how he overcame his own trauma of being taken prisoner and shot while working at a correctional centre. 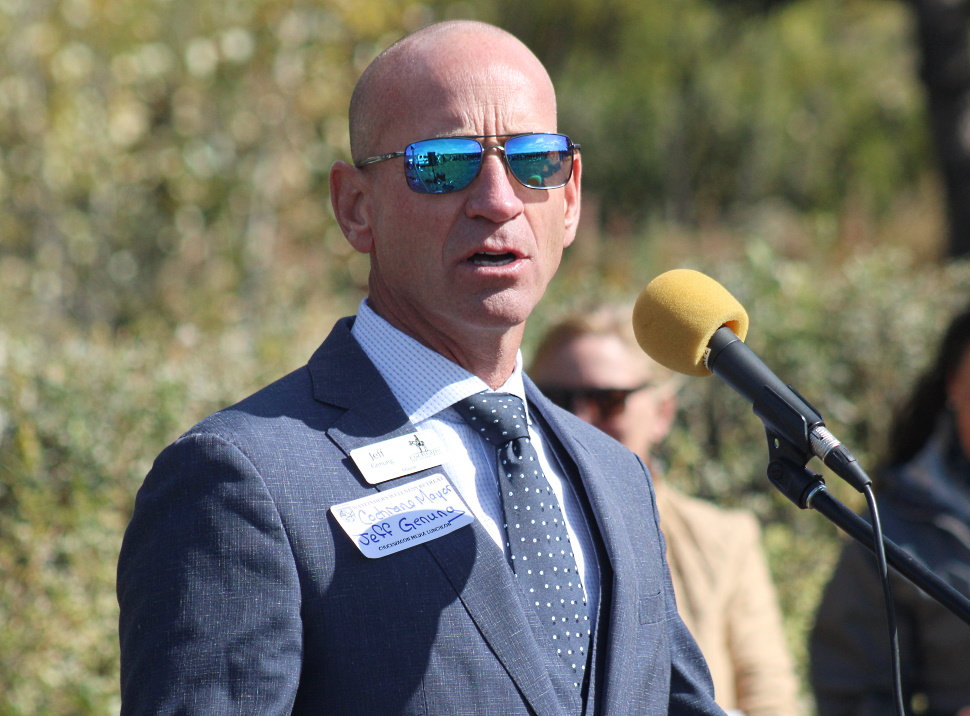 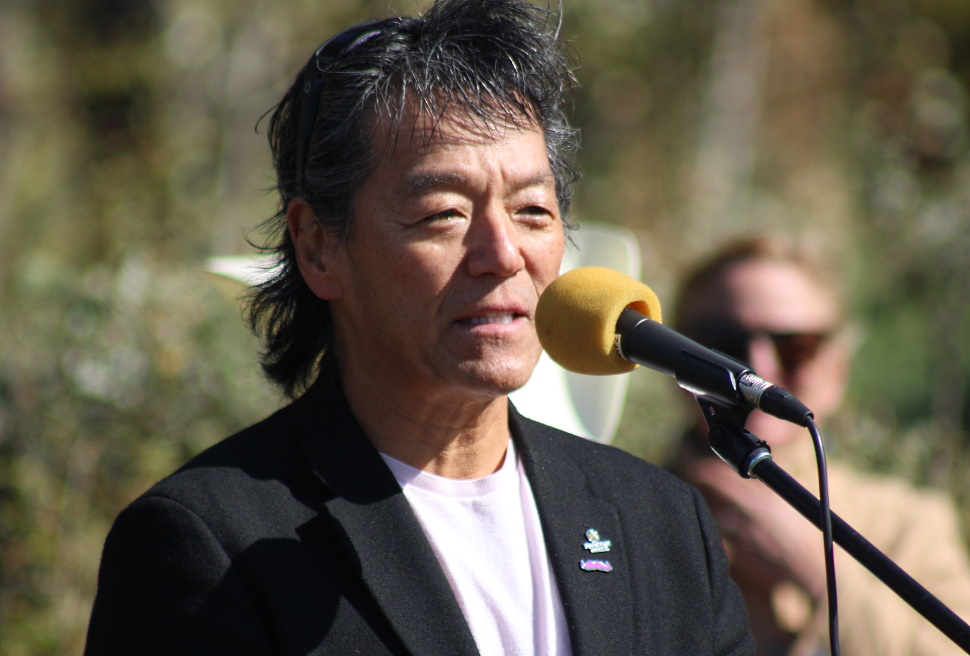 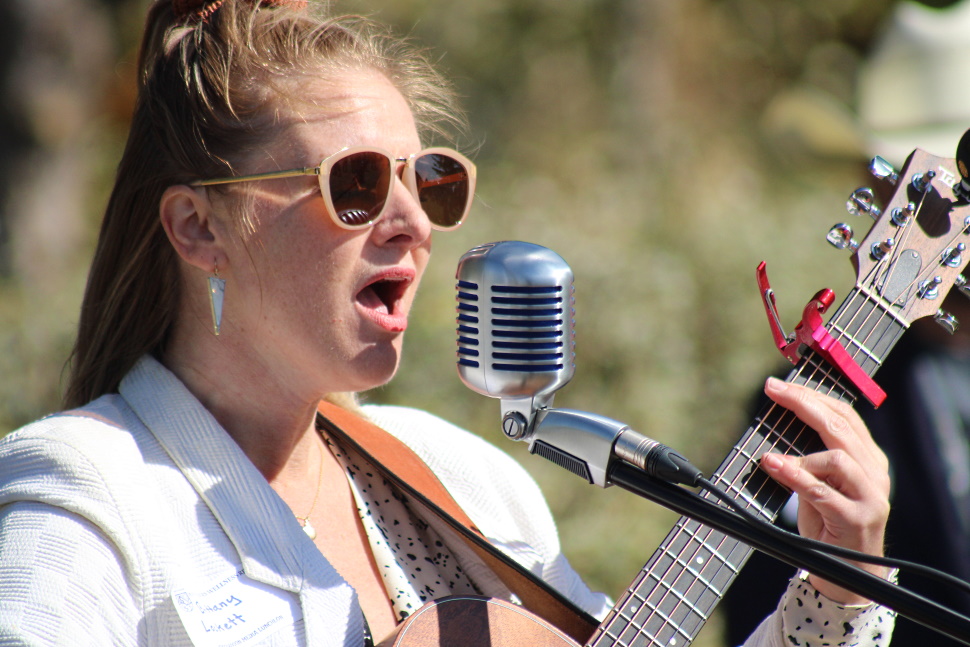 Singer-songwriter Brittany Lockett performed her original composition "The Silverlining" that has struck a chord with the Wayfinder creators. 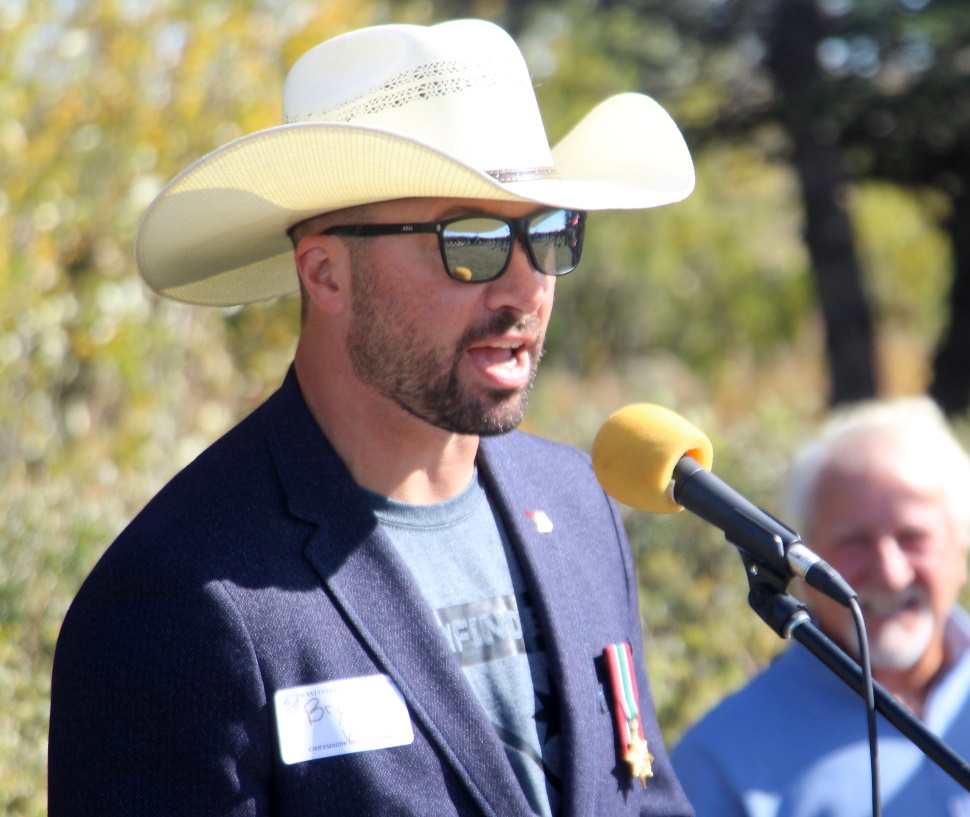 Bryce Talsma emceed the program and is vice-president of Wayfinders.
Previous Next