Representatives of the Cochrane branch of the Royal Canadian Legion kicked off its annual Poppy Fund Drive yesterday by presenting the first poppy to town councillor Marni Fedeyko.

Last year, Legion president Karen Bruens, who is also district commander, started the new tradition of presenting the mayor with the first poppy. She says the Legion is part of the community and believes it's only suiting to present the first poppy to the mayor. She also saluted Mayor Jeff Genung for being very supportive of the Legion.

Fedeyko was filling in for Mayor Genung, who was forced into self-isolation after Municipal Affairs minister Tracy Allard tested positive for COVID-19. Fedeyko was unable to attend the opening.

The councillor says she has been a supporter of the poppy drive and has participated in Remembrance Day ceremonies in the past, and considered it an honour to receive the first poppy.

"It means a great deal, not only as a councillor but as a person," says Fedeyko. "Remembering what all of our military personnel and veterans have done for our country is huge."

Soon, poppies will be available from Legionnaires and at many local businesses. COVID-19 safety measures have been put in place.

Members of the 3013 Cochrane Army Cadets and the 952 'WestJet' RCACS air cadets will not be able to participate this year. They're the strong young men and women who stand tall, distributing poppies at larger stores and grocers in the community.

To help distribute poppies, the Legion is holding Pop-In Poppy drive-thru events on Oct. 31 and Nov. 7.

"At different locations throughout the community, we'll have a Pop-Up Poppy," explains Poppy chair Debra Mayfield, who is also the branch's service officer. "There will be some of our members there, with identification on their vehicles, and you can drive through to receive a poppy and make a donation."

Businesses will also be solicited to purchase a wreath and will be recognized at the Nov. 11 Remembrance Day ceremony.

While the poppy campaign faces new challenges this year, the need to assist area veterans is as great as ever.

All donations made locally remain in the Cochrane area to support veterans. It also assists both cadet units.

"Those funds cannot be used for our Legion expenses," says President Bruens. "They are used for veterans and their families. So, if a veteran comes to us and needs help, then we deal with it at the local level. If it's something beyond the local level, then we make sure they have the footprint for where they need to go."

November 5 to 11 is Veterans Week. The Legion will be recognizing veterans, who are all those who have or are still serving in the military, as peace officers for United Nations and NATO, and with the RCMP. 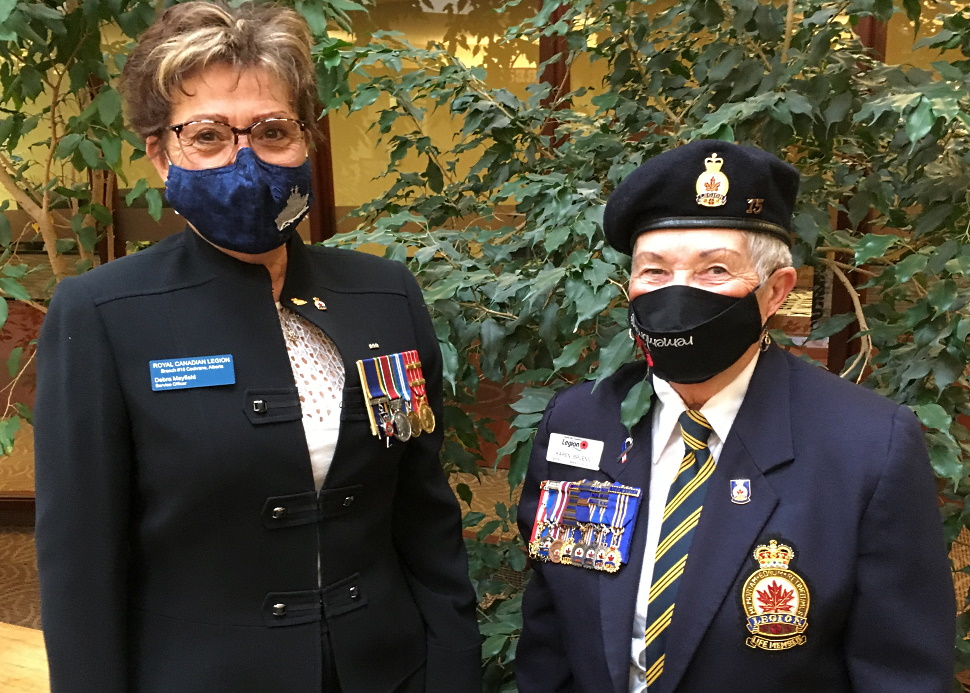