The next step in considering which flood mitigation project to undertake on the Bow River has received funding.

A budget of $50 million has been designated over three years to complete the second phase of determining the best ways to manage peak flows of the river. All three scenarios include major reservoirs and dams west and east of Cochrane.

Mark Comerford, Alberta Environment and Parks (AEP) director of resilience projects, says the first phase of the investigation will soon be completed, and planning for phase two will begin shortly.

During phase two, geotechnical site investigations, further environmental assessments, traditional land-use studies, and some preliminary designing and engineering will be completed on all three options.

"Accompanying this will be further stakeholder and indigenous engagements as we go through the process, much as we did in phase one," says Comerford.

Those solutions include a new dam/reservoirs either within the Stoney Nakoda Nation or at the east end of the Glenbow Ranch Provincial Park. The third option is to decommission the existing TransAlta Ghost dam and build a new one 2.5 km downstream, then expand the size of its existing reservoir.

All three scenarios will have a major impact upon people, private property, parks, and major infrastructure, including the CP mainline. While no firm prices have been attached to any of the projects, officials initially said all will likely be in the $1 billion range.

A Bow River Working Group narrowed the list from 15 possible solutions. The aim is to reduce the Bow River's peak flow rate to 1,200 cubic metres per second (cusecs). Further mitigation efforts within the City of Calgary would reduce it to 700 cusecs.

The East Glenbow project would have the largest impact on private/public landowners, and the Glenbow Ranch Park Park. The park's foundation remains in opposition to the Glenbow East option.

Potential flood and drought storage projects on the Bow River were identified in the working group's May 2017 report. AEP commissioned Wood Environment & Infrastructure Solutions to study the reservoir options. 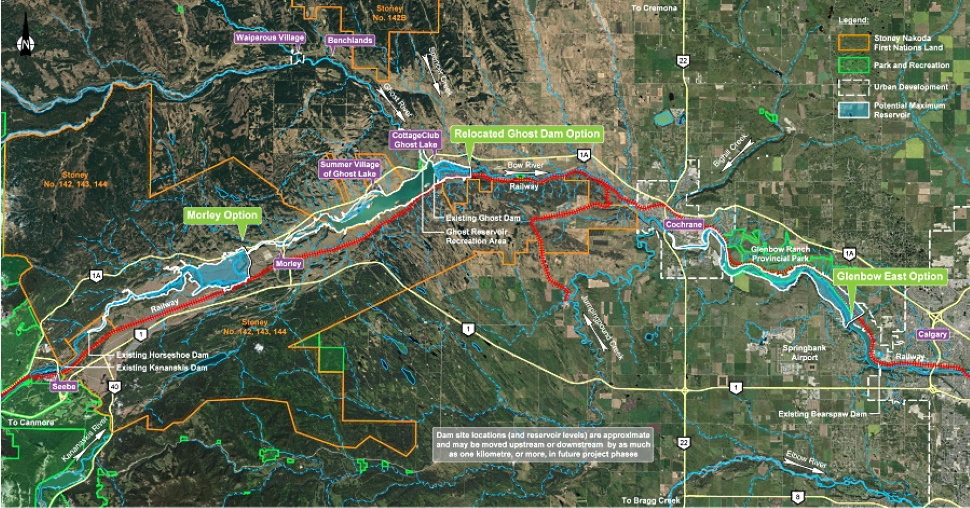 Still time to register for Country Cruise this weekend