Raising funds, collecting supplies for those devastated by typhoons in the Philippines

A soup event and bottle drive have raised almost $2,000 to aid those devastated by a series of typhoons in the Philippines, and further efforts are now in the works.

All 100 orders of soup prepared were purchased and additional cash donations were made in a recent "Sopas for 'Pinos" fundraiser. Prior to that, a bottle drive here and that was also supported by friends in Calgary raised about $700.

While the finer details are being sorted out, it has the working name "The Twelve Days of Christmas" because it will start 12 days before Christmas. It is anticipated to be held over several nights with different performers from both the Filipino and the broader community.

Forex Cargo has donated the delivery of three shipping boxes, and they will be filled with nonperishable foods, toiletries, bedding items. Donations can be dropped off at Bubble Tea Brewers. Cash donations are also being accepted at the same location.

The Filipino association is also coordinating efforts with the Town of Cochrane, municipal agencies, hotels, and others in the community, including the Bow Valley Baptist Church and the Cochrane Immigrant Services Committee.

Back-to-back typhoons have hit the multiple island paradise, and more are expected before the end of the typhoon season. The latest, Typhoon Vamco, known as Typhoon Ulysses in the Philippines, killed several people and a reported 180,000 people were evacuated. Just 10 days before, Typhoon Goni hit the same communities and an estimated 240,000 people lost their homes.

Association vice-president Edwin Aguanta sat down to give a brief account of the devastation caused by the typhoons that have impacted many families of Cochrane's vibrant Filipino community.

"Most of the cities and areas that are near the river got flooded," says Aguanta."Buildings were also devastated by strong winds, and boulders and thick mud that rolled down from the Mayon Volcano and devoured most of the villages.

He says that that mud literally covered two-storey homes and the water hasn't yet subsided that reaches the rooftops of many homes.

"It has impacted thousands of people, and even the evacuation centres are devastated."

Power and cell phone/internet service are out for many, there's no potable water, many homes have been destroyed, and there's little food available.

"It's going to be a hard recovery for the Philippines, especially right now that we're still in the COVID crisis. Imagine you are in recovery with no protection."

He says they appreciate the many who have come together to help with the fundraising efforts. In addition to the many volunteers, they received valuable assistance from Chef Norben Sayon, of Quatro Asian Bistro, Gre Taps, Bubble Tea Brewers, Pastor Magdiwang Oyong Ruba, the Bow Valley Baptist Church, and the Chinese Wok Restaurant.

Aguanta says they also appreciate the generous donations made by Celeste Bista and Daisy McKinnon.

"We can't thank them enough for their support," he says. "We hope that our hearts won't get tired of helping those who are in need. May God bless us all."

Aguanta says the money and supplies will be equally distributed to all three communities impacted, and the FCACA will be receiving an account of how the contributions are utilized.

"So we'll have a very transparent and fluid execution of the distribution of help."

To keep up to date on the efforts of the FCACA click here. You can also contact FCACA president Michael Bautista at 403-999-9123. 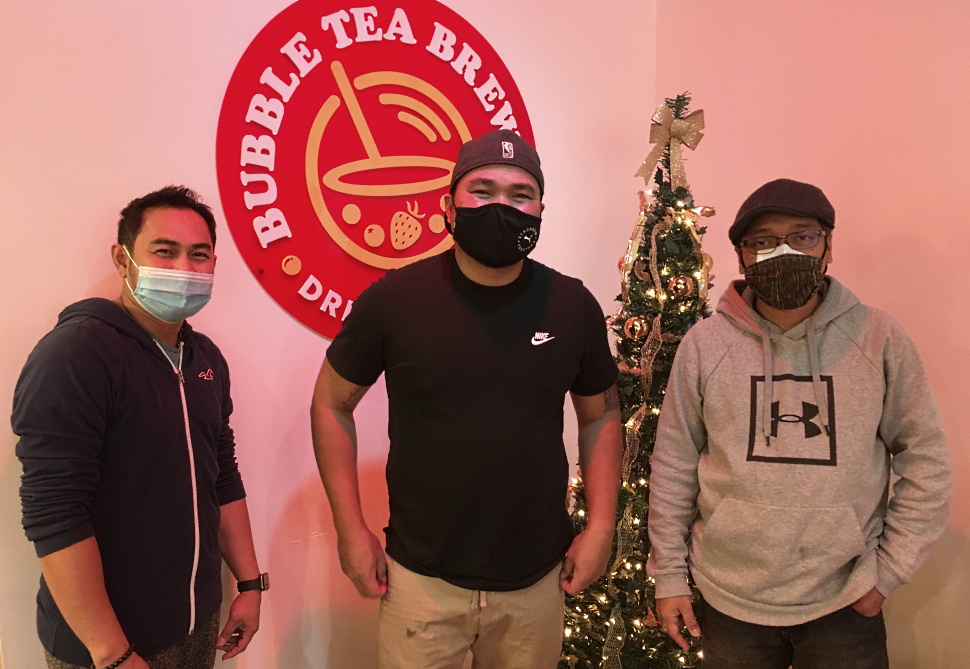 From left, Steve Dayao, FCACA president Michael Baptista, and vice-president Edwin Aguanta at the Bubble Tea Brewers that has served as a central point in the typhoon relief efforts.

No new deaths, but another daily record provincial high and Cochrane up five cases