The Bighill Creek Preservation Society (BCPS) continues to express concern about the pressure that could be placed on the Big Hill Creek watershed by what is now potentially aggregate mining operations on eight quarter-sections to the north and west of the Big Hill Springs Provincial Park.

It also admires the aspirations of Rocky View County (RVC) to improve outdoor recreational opportunities within the county but have seen little follow through on their plans.

The society recently received an updated map of the area surrounding the popular and small provincial park which shows the ownership of lands adjacent to the springs and park which are held by gravel operators, three of which have been acquired by Tricycle Lane Ranches, a subsidiary of Burnco, next to the springs.

That amounts to 1,200 acres of land that abuts the park and the springs. The spring is actually located on private land controlled by a gravel company and is not located within park boundaries.

A public hearing is scheduled for one of these quarter-sections on Mar. 2. Mountain Ash, formerly known as Summit, is seeking a rezoning to allow an aggregate operation.

Surprisingly, that hearing was originally scheduled to be held on Jan. 12, in advance of an appeal for another quarter-section immediately south of the new application.

RVC approved three new gravel pits on Big Hill Springs Rd.  (Hwy. 567) in 2017 and 2018. Some local residents joined together to legally challenge those decisions.  In September 2019, the judge ruled in favour of the residents.

BCPS vice-president Vivian Pharis says they remain gravely concerned for the provincial park and the health of the Bighill Creek.

"They are getting ready to choke this park out of existence, also choke off its aquifer that supplies 50 per cent of the water to Bighill Creek, a major Cochrane asset," says Pharis. "This hardly assists recreation in the county."

The preservation society believes the Bighill Creek watershed is in desperate need of further study.

BCPS believes only one study exists, and say it's hardly enough to fully understand the significance of the creek and its aquifer.

A 2007 thesis by Soren Poschmann, then an undergraduate of the University of Calgary, determined that the source waters for the park and about 50 per cent of the flow into Bighill Creek emanate from an aquifer which extends generally north and west of the park. Among its reach is Cochrane Lake.

"It's amazing that we've got that one little study that was done that we can refer to, otherwise there would be nothing, really."

Pharis sought further insight from AWA director Cliff Wallis, an avid naturalist and a professional biologist, who has conducted field research on species at risk, environmentally significant areas, and wetlands.

"He said that it was considered a provincially significant spring and creek because of the tufa formations that have over thousands of years cumulated to make the interest features of the park.

"The water that comes from those springs hardly varies through the years in terms of temperature and amount, so it's very unique."

She says COVID-19 got in the way of further study being launched by students of Masaki Hayashi. professor of geoscience at the U of C.

"We're hoping we could resurrect that piece of work because it's an important piece that we will need for our watershed plan."

Pharis says she admires some of the ideas included in the RVC's 2011 parks and open spaces master plan but says there's hardly been any action of its recommendations.

"It's really well designed and a plan that reflects what the people who had come out in open houses wanted to see, but it never got implement," says Pharis, also known for her work with the Alberta Wilderness Association (AWA).

A resident of the county for almost 50 years, she says outdoor experiences are in high demand by county residents.

"My neighbourhood is filled with people who go out every morning to walk their dogs and get their exercise for their days. They don't walk to just walk roads. It would be really nice if there were many more trail systems than Rocky View has provided. I think it's really letting its citizens down in this field."

The finishing touches are being added to an RVC recreation and parks master plan that is expected the guide the county through the next quarter-century. It's expected to be presented to RVC's Recreation Governance Committee in the first quarter of 2021. Public engagement wrapped up in December, and attendance at the two open houses, hindered by COVID-19, was sparse.

She says the Big Hill Springs stands out as one of the few remaining natural landscapes remaining in the county.

"Rocky View is, apart from Bragg Creek and maybe the Elbow River Valley, mostly converted to agriculture. So this is quite a unique little valley."

Those wanting to share their views prior to the public hearing on the proposal aggregate operation can contact RVC planner Jessica Anderson at JAnderson@rockyview.ca. Reference Bylaw C-8051-2020 (Application PL 2020031).

The provincial park is located 15 minutes north of Cochrane. 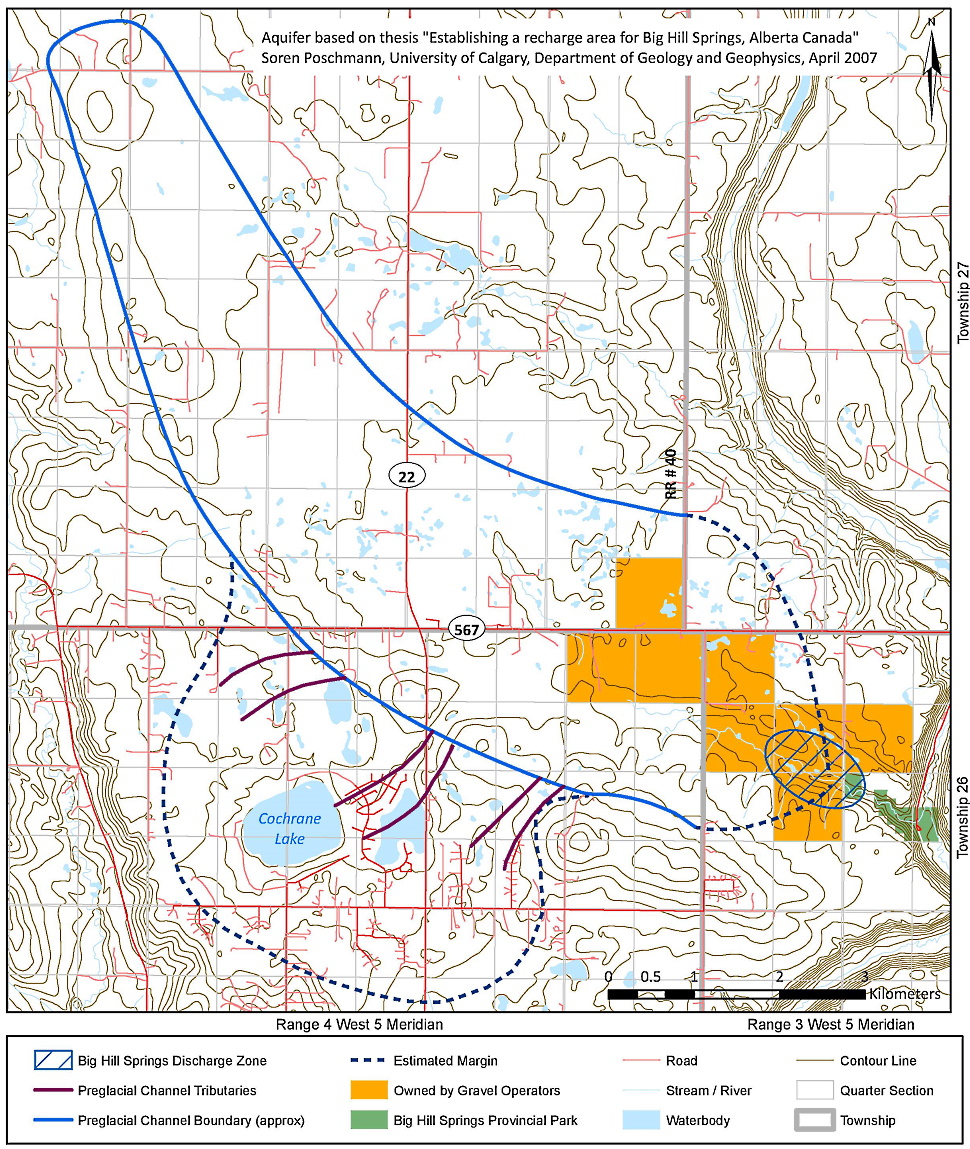 A map showing the extent of the Bighill Creek's aquifer.